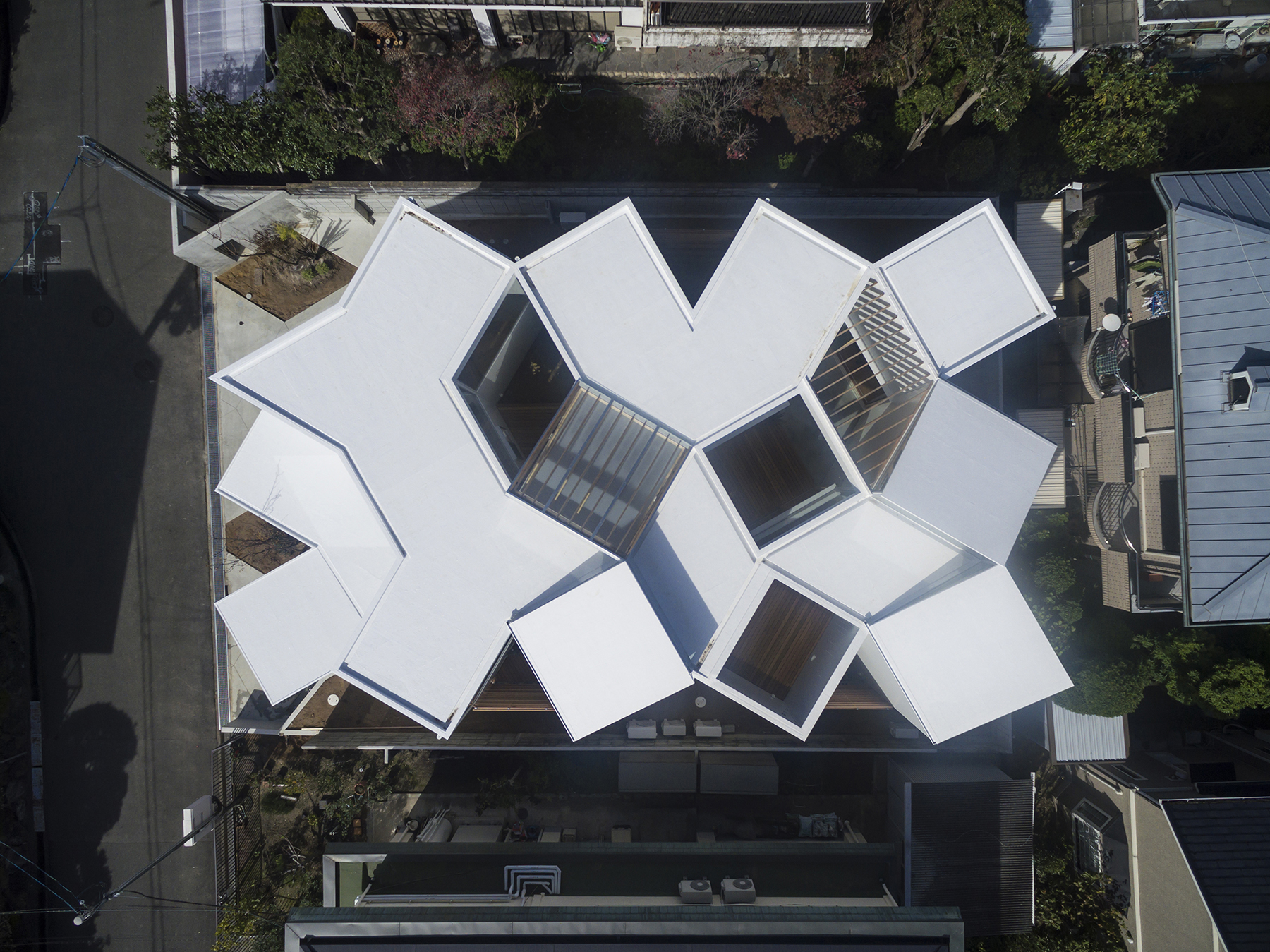 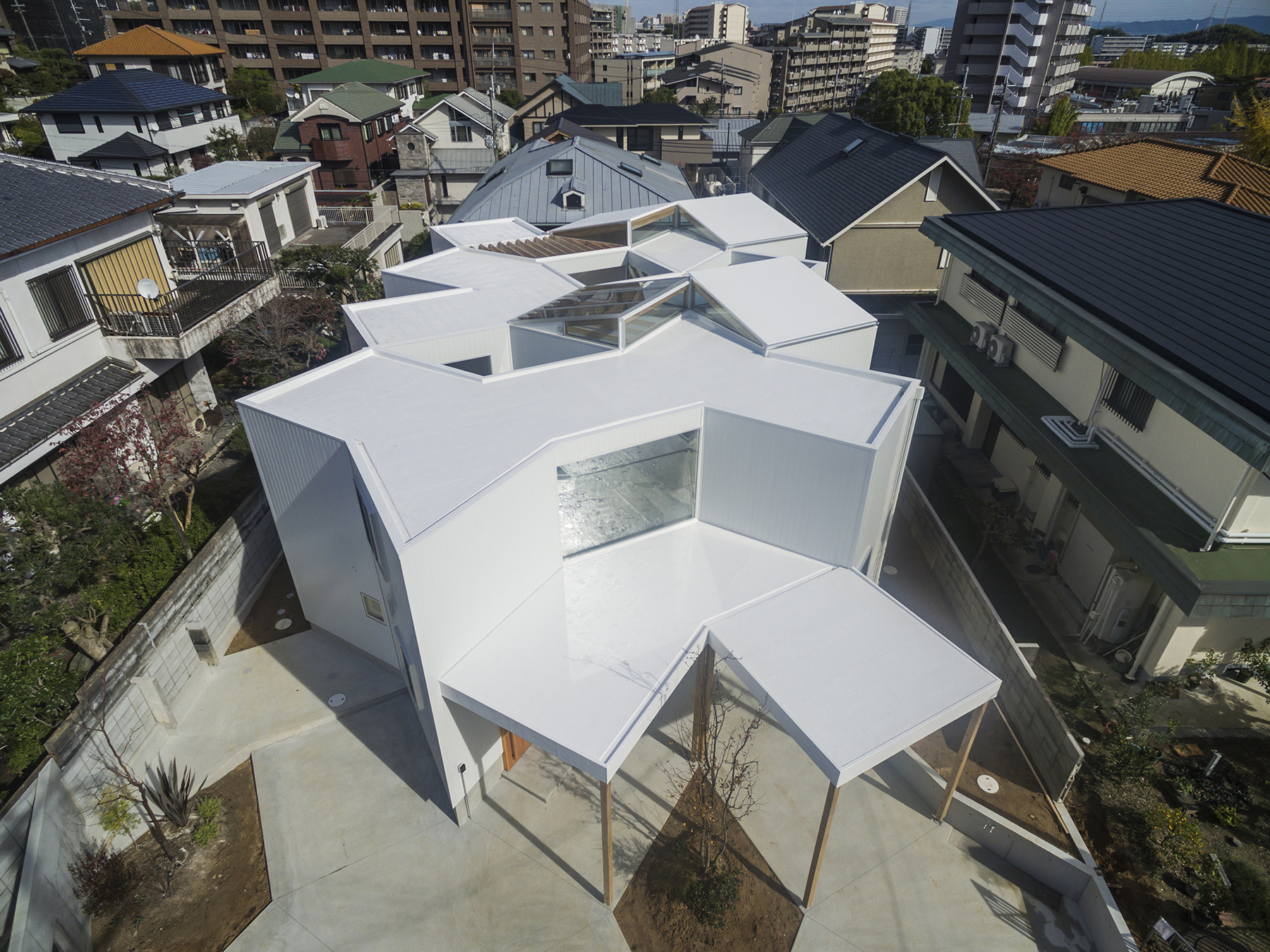 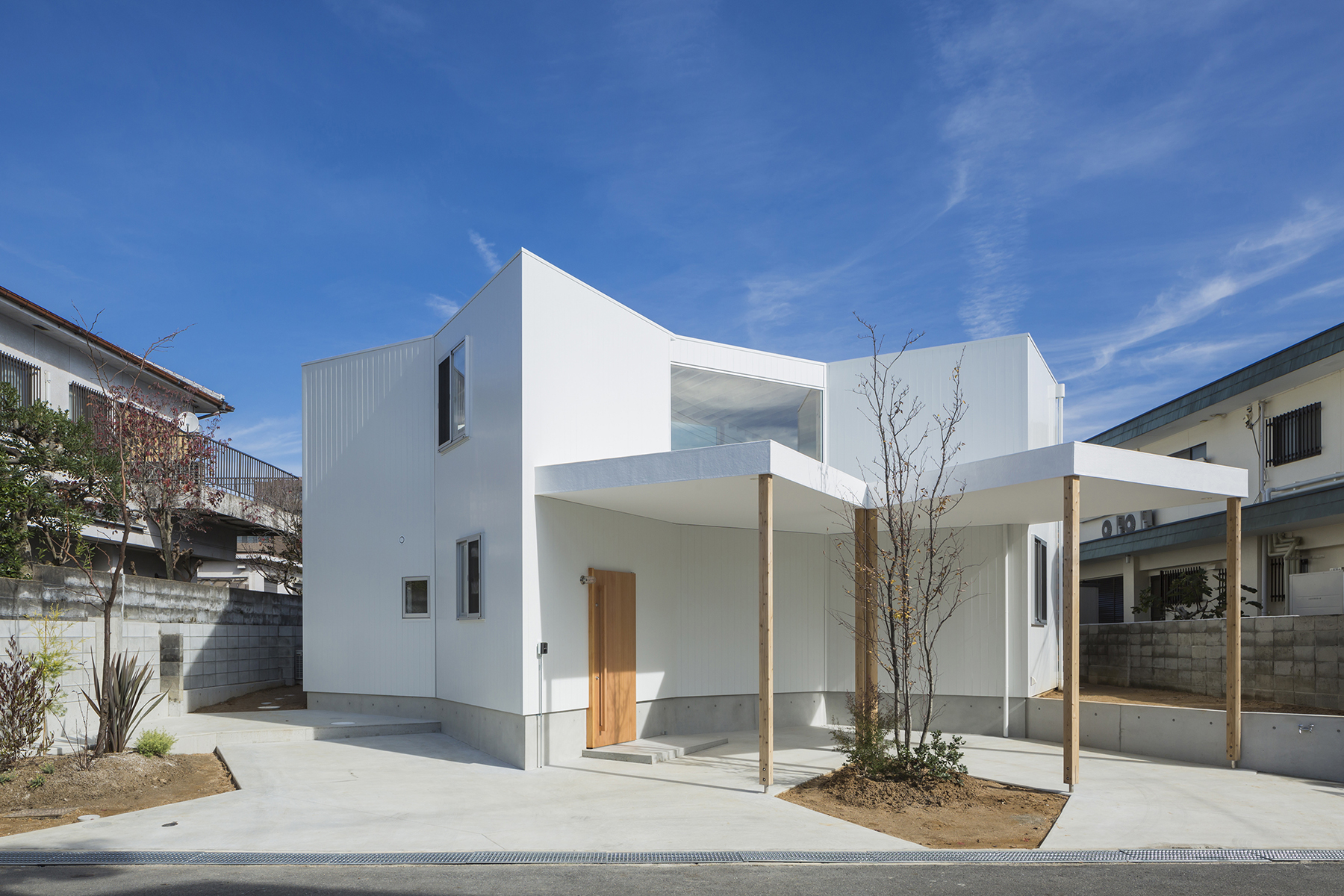 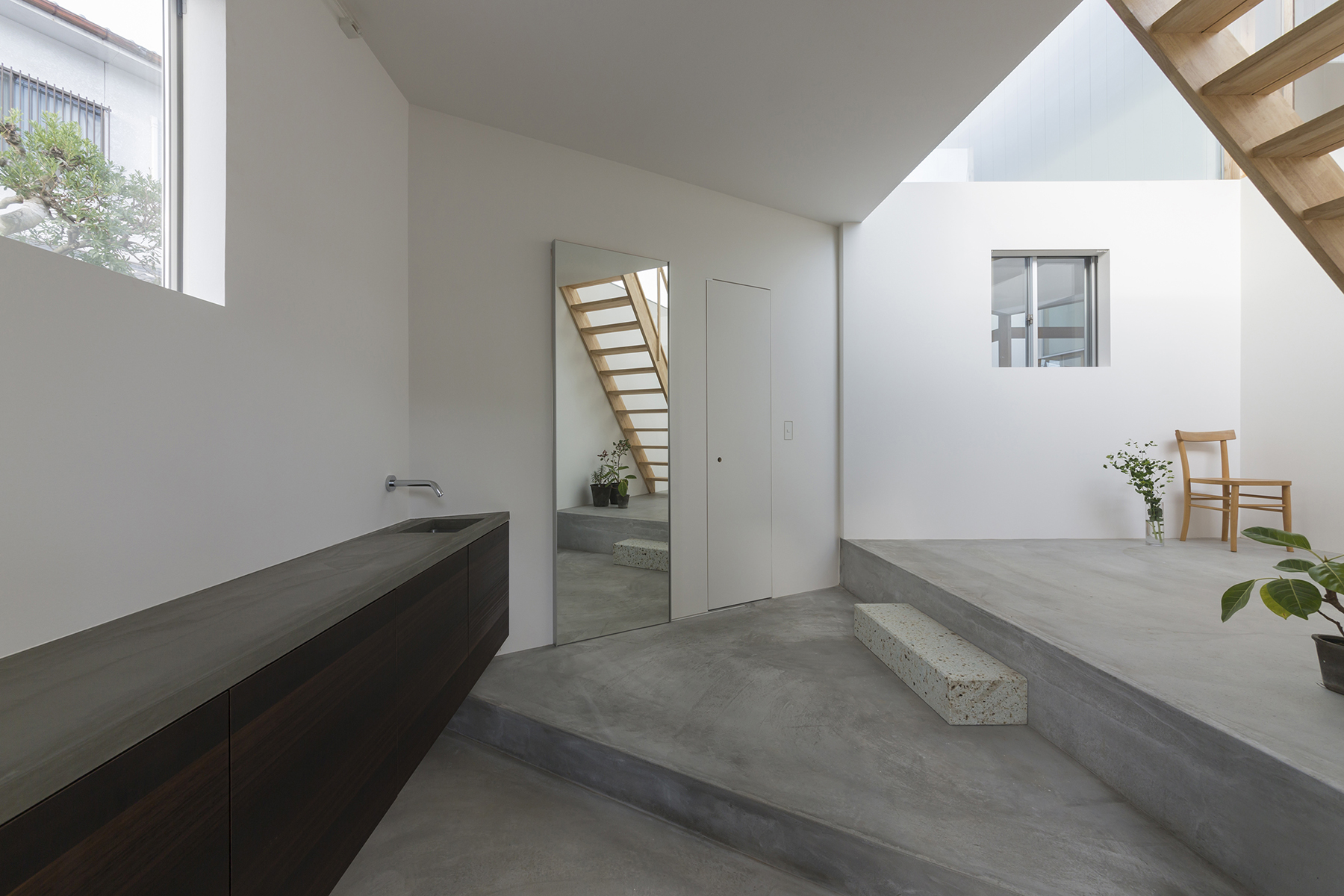 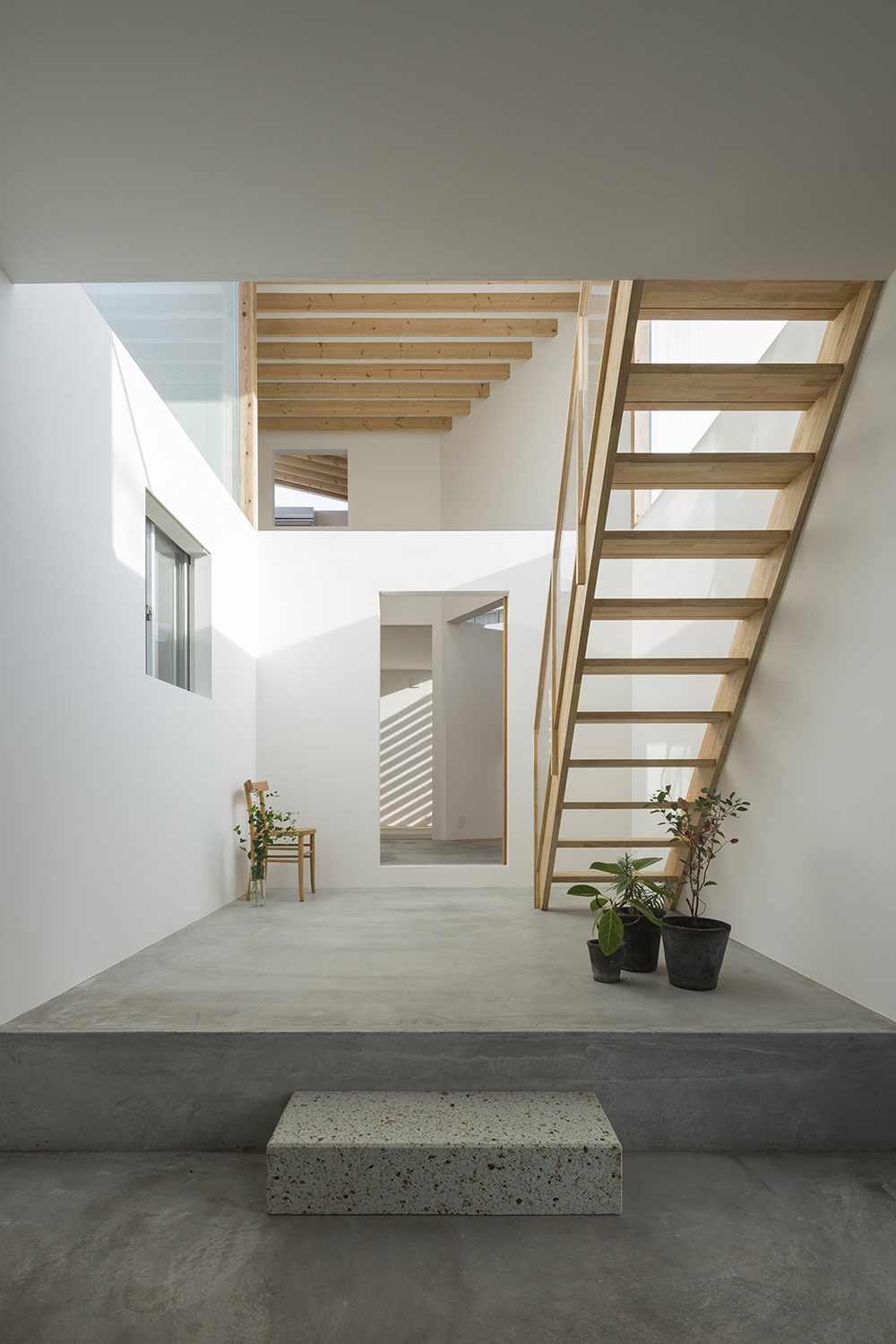 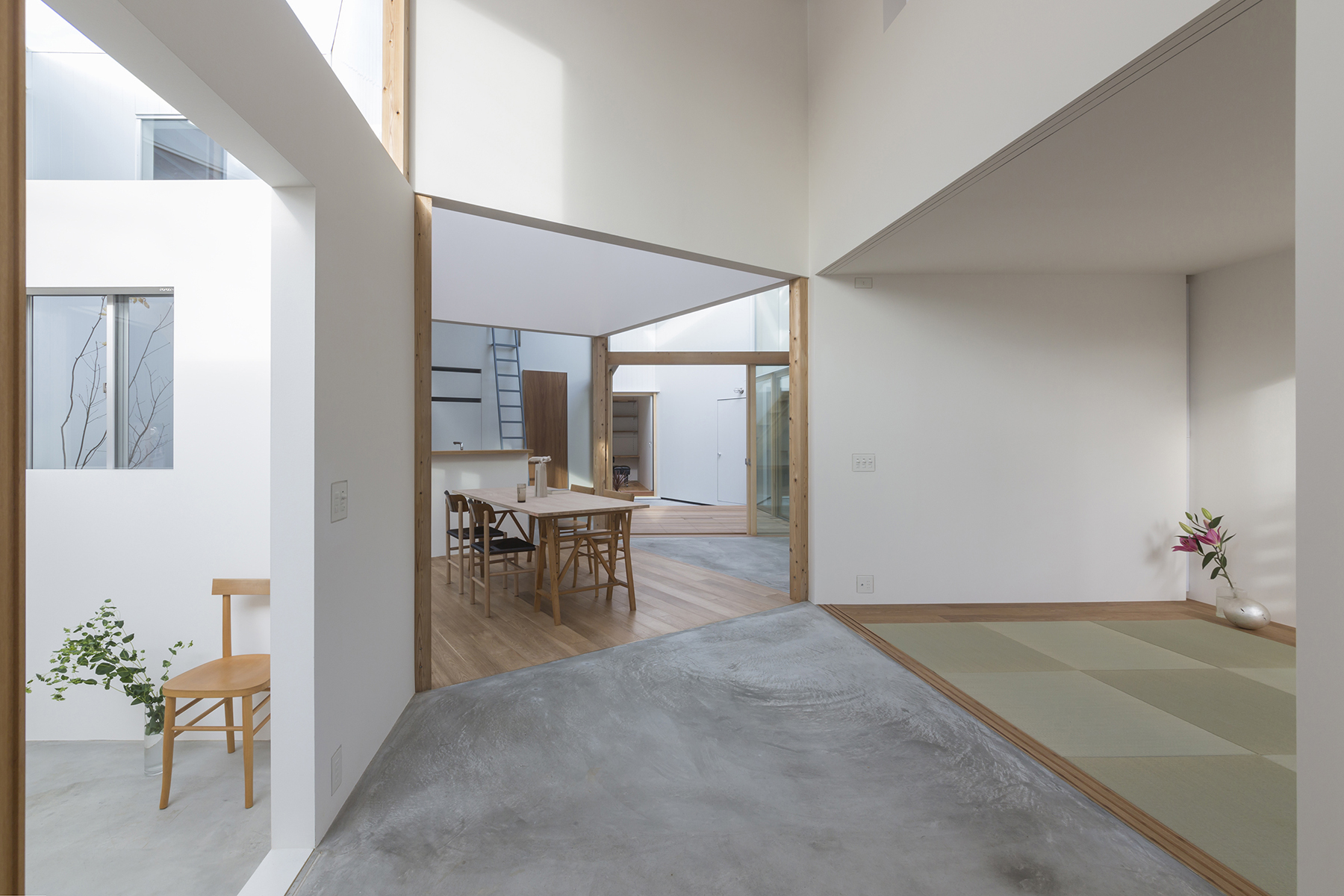 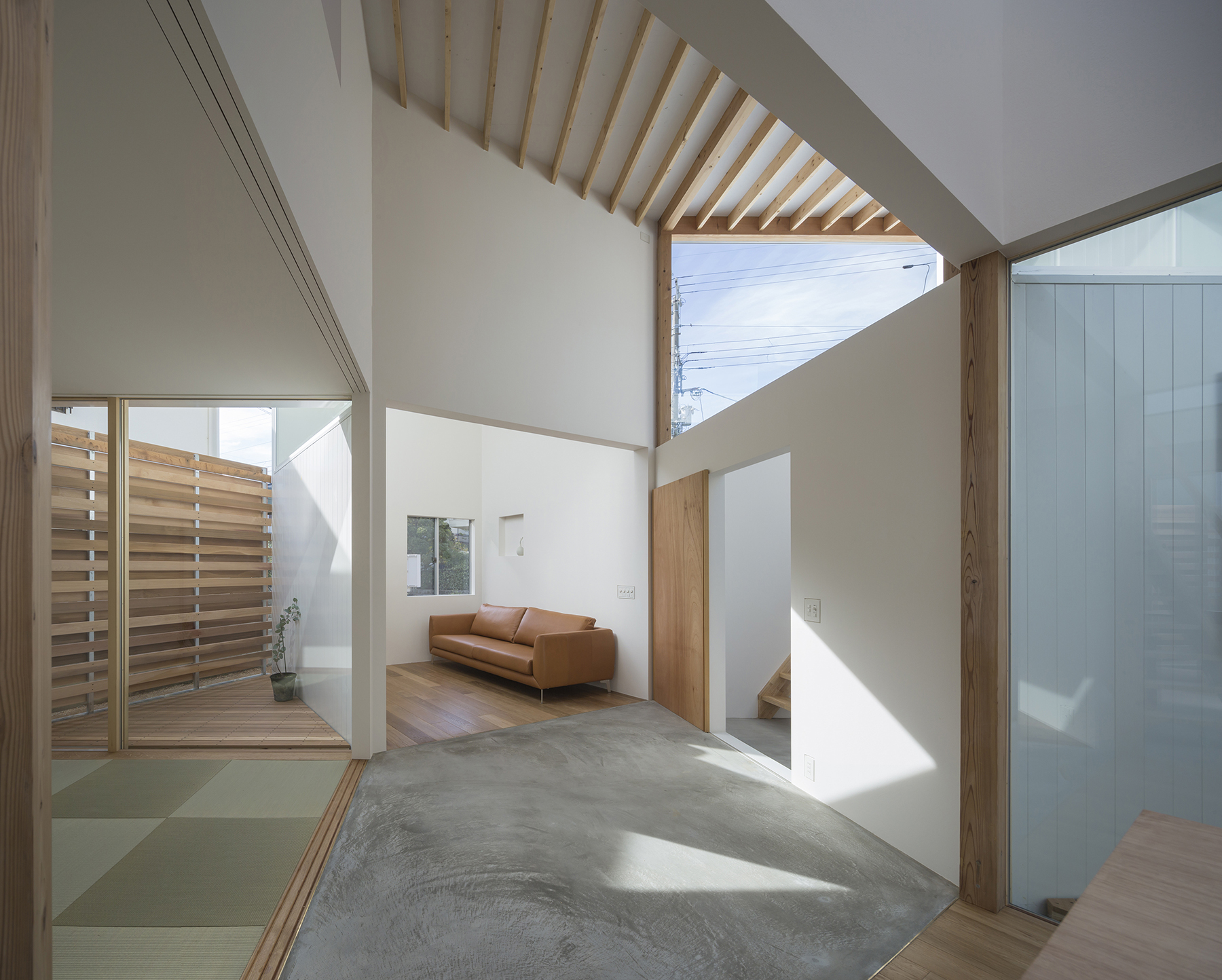 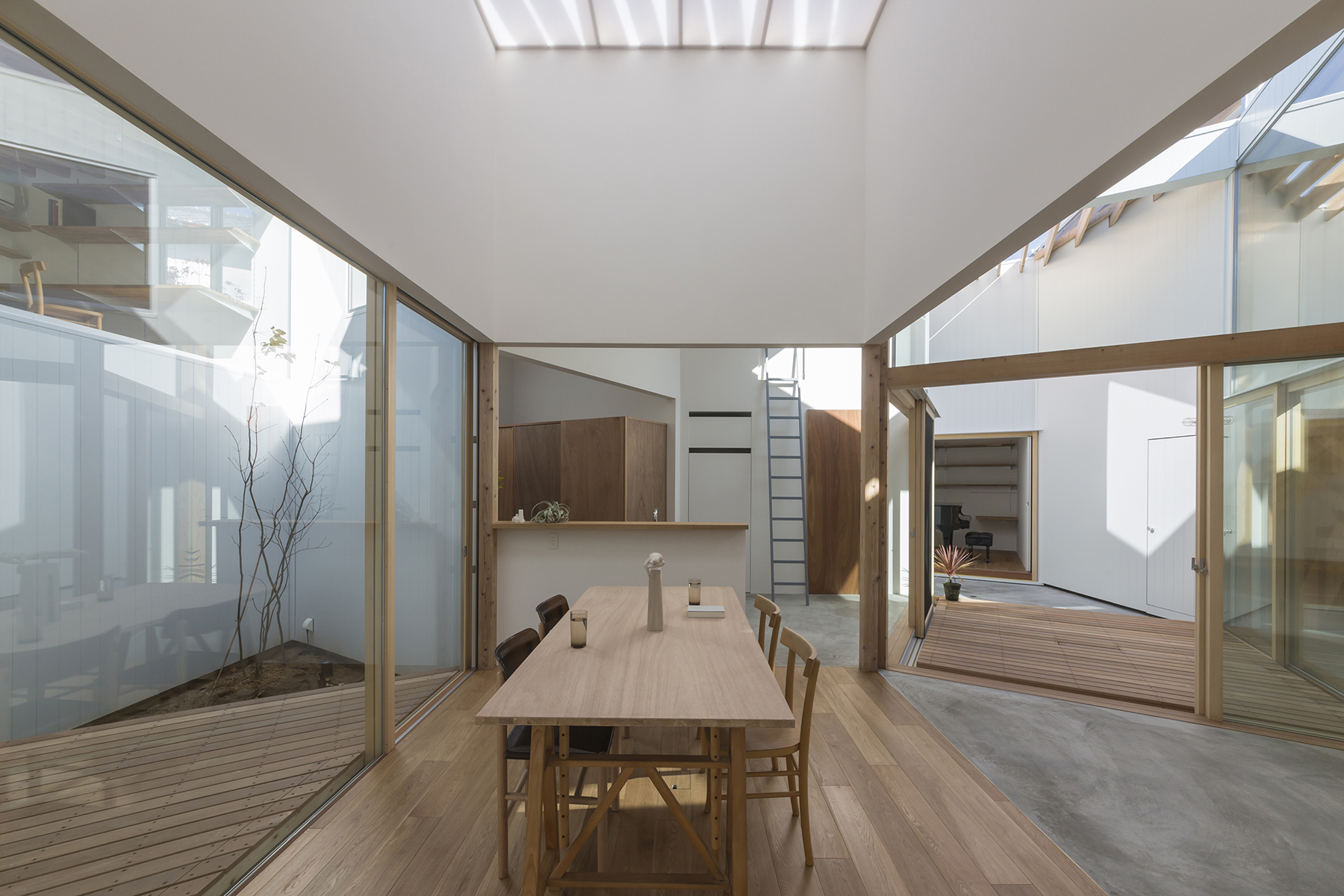 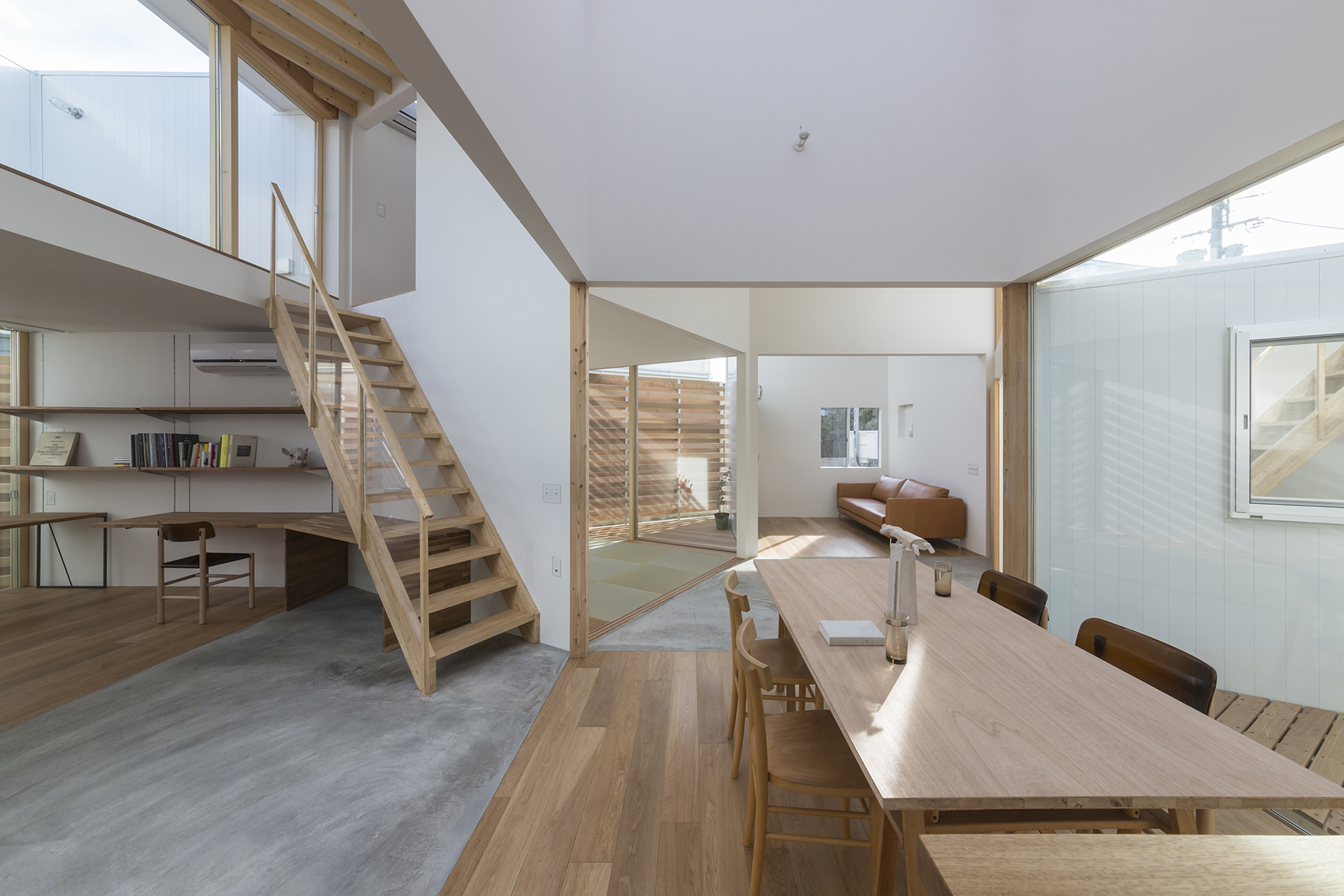 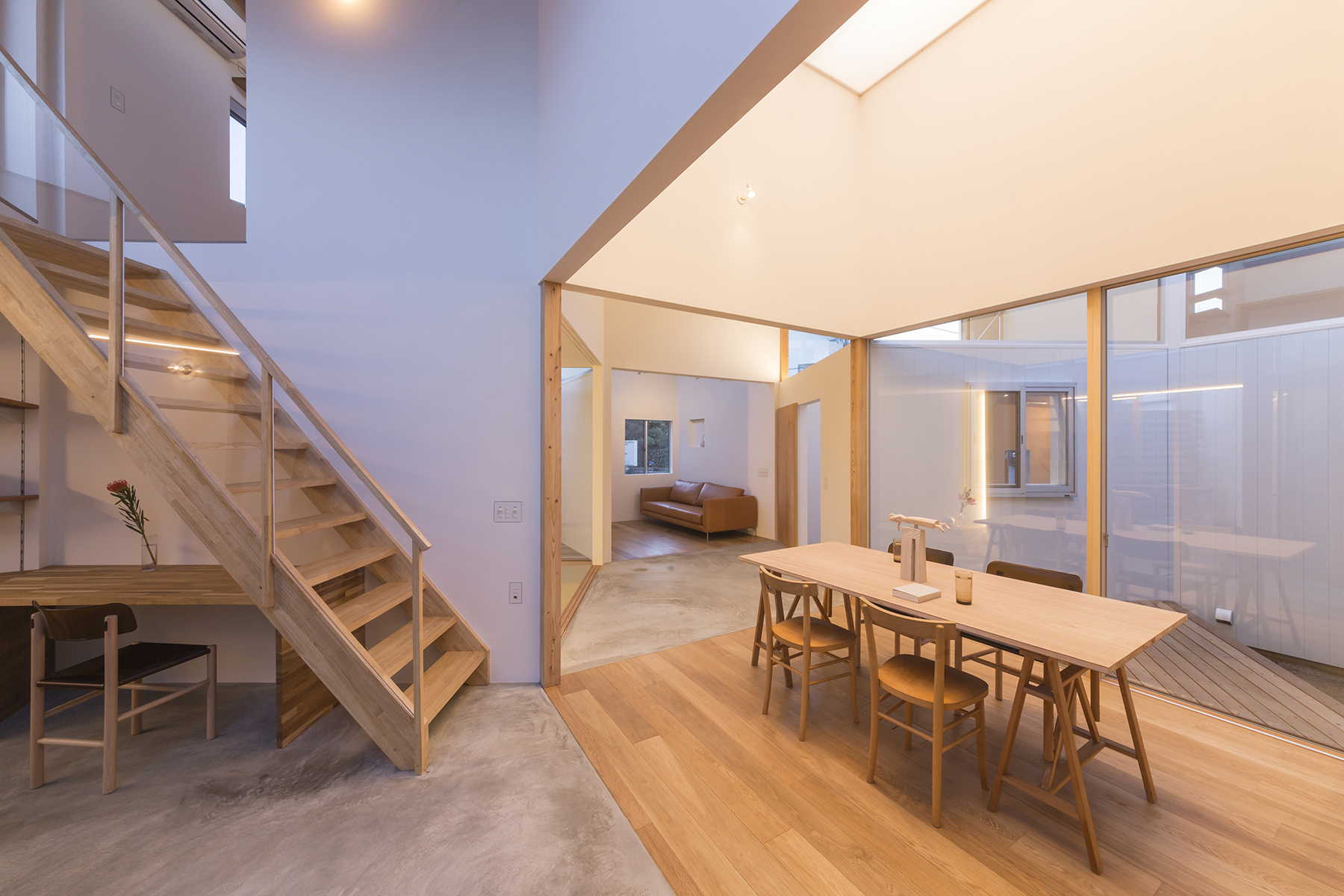 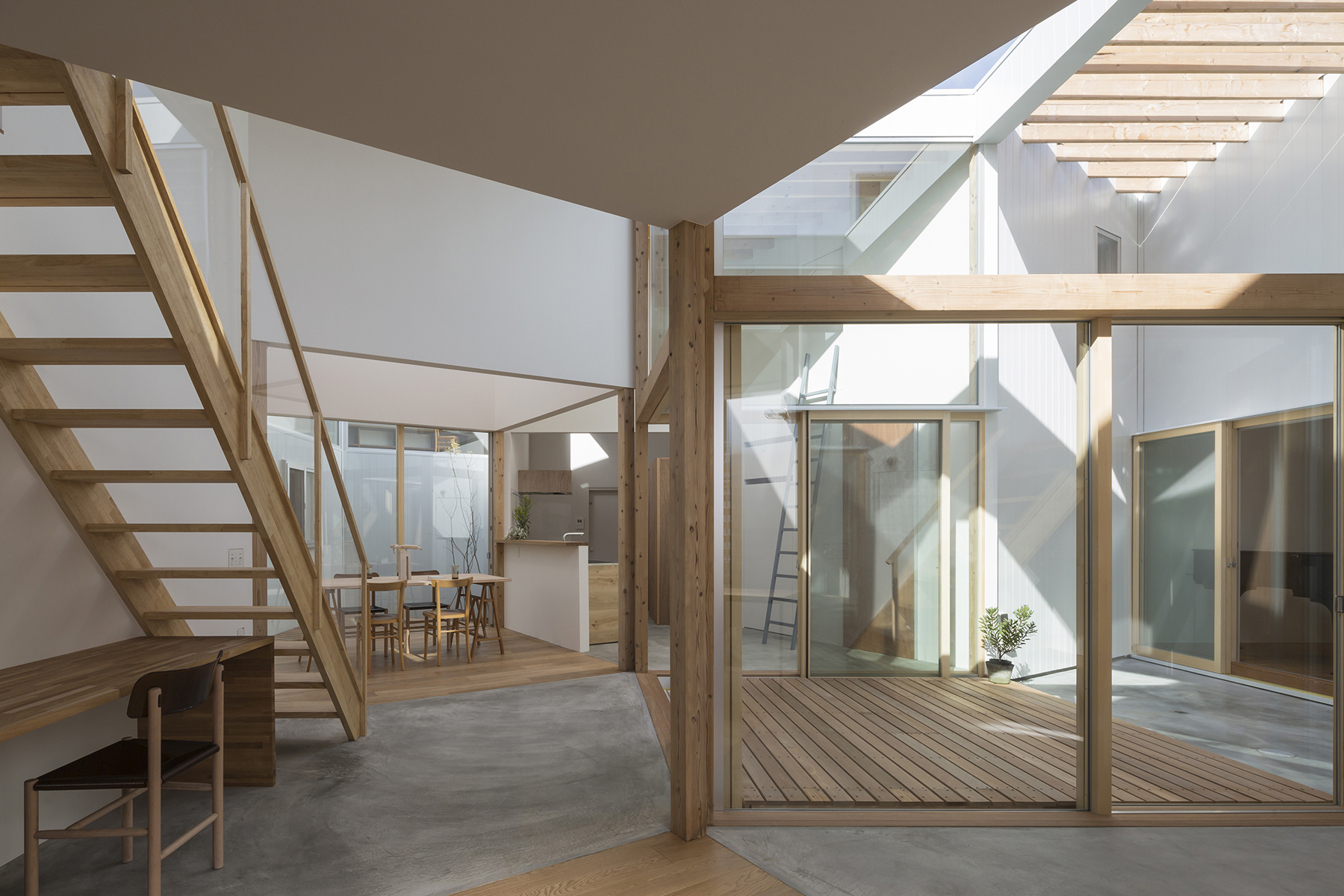 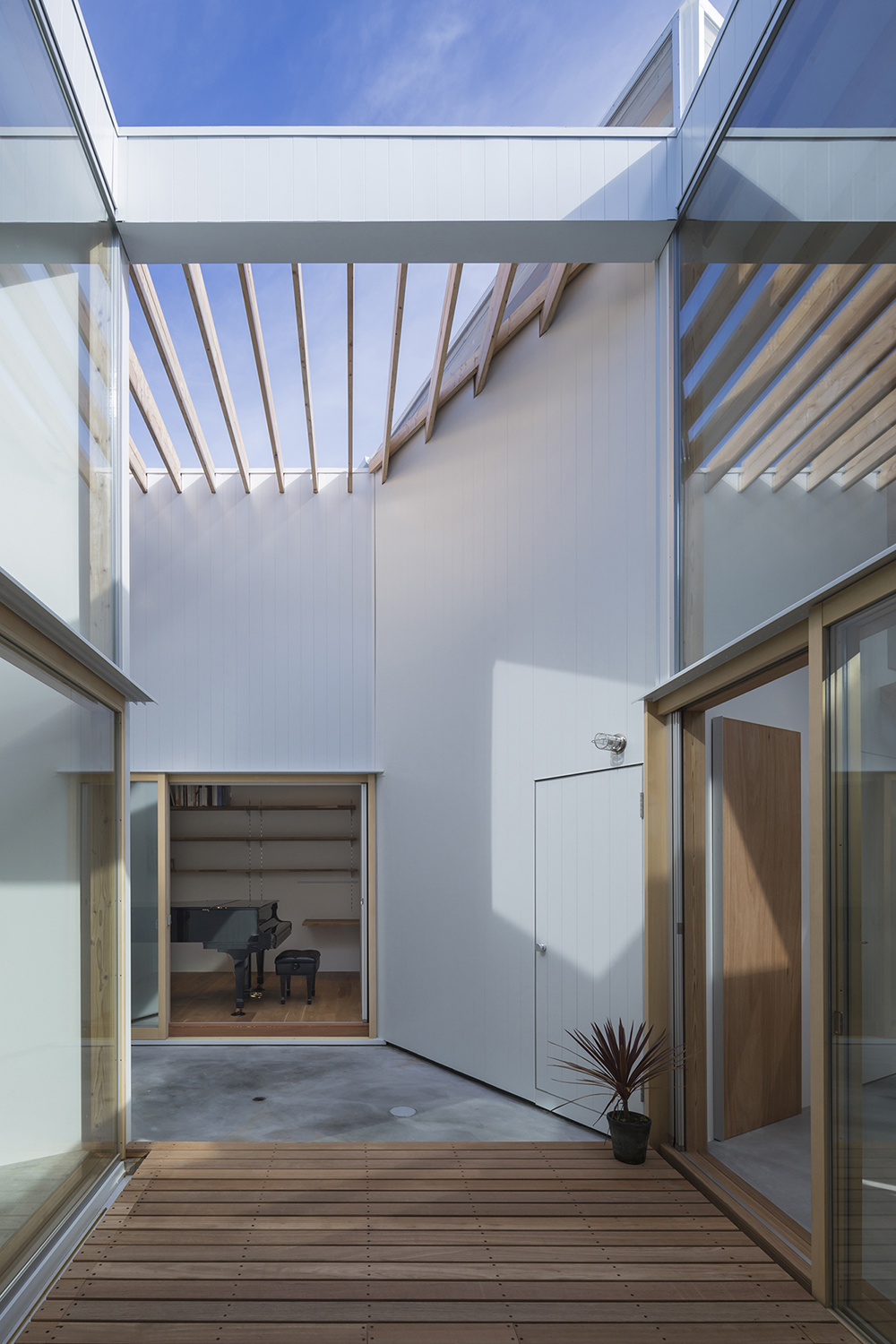 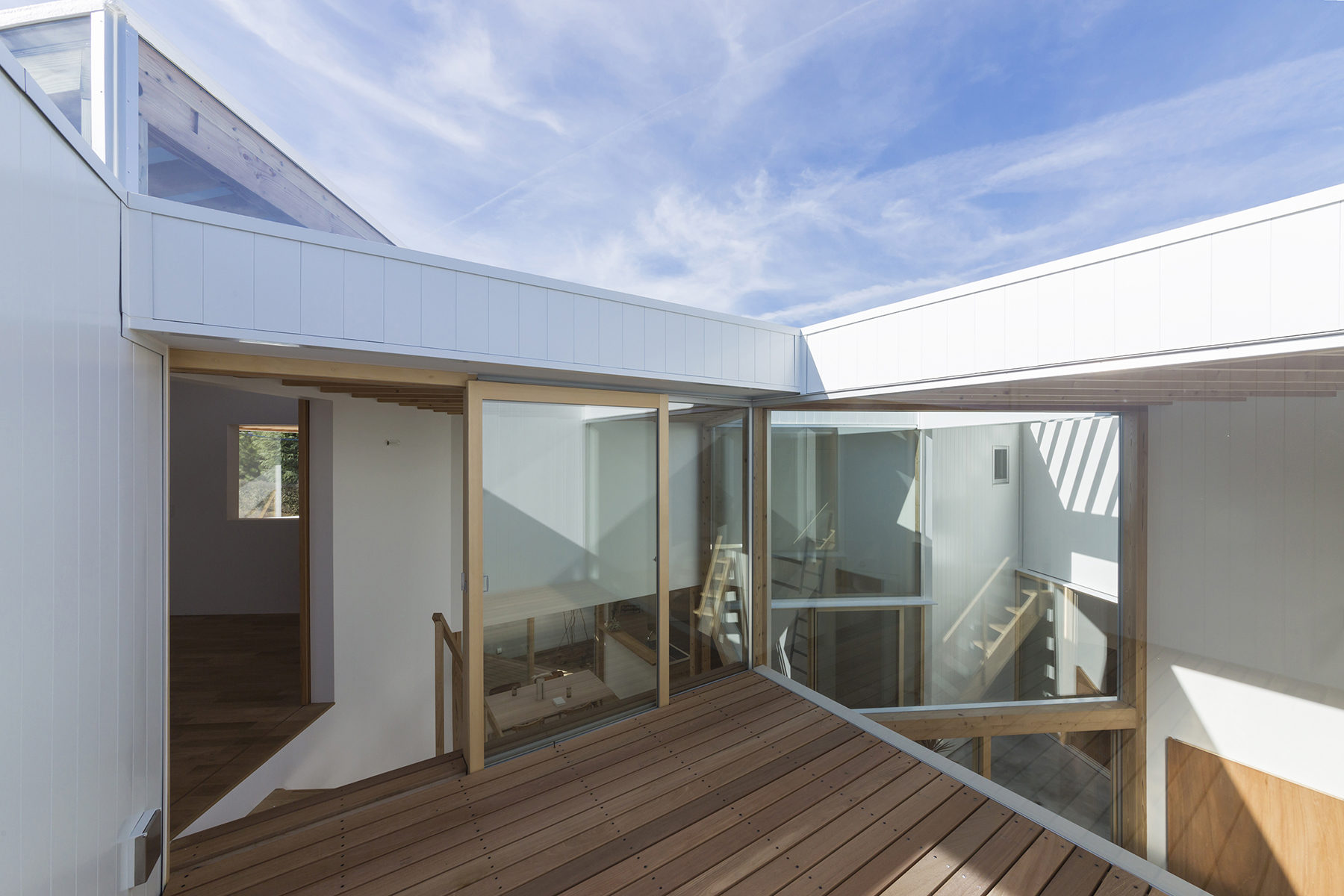 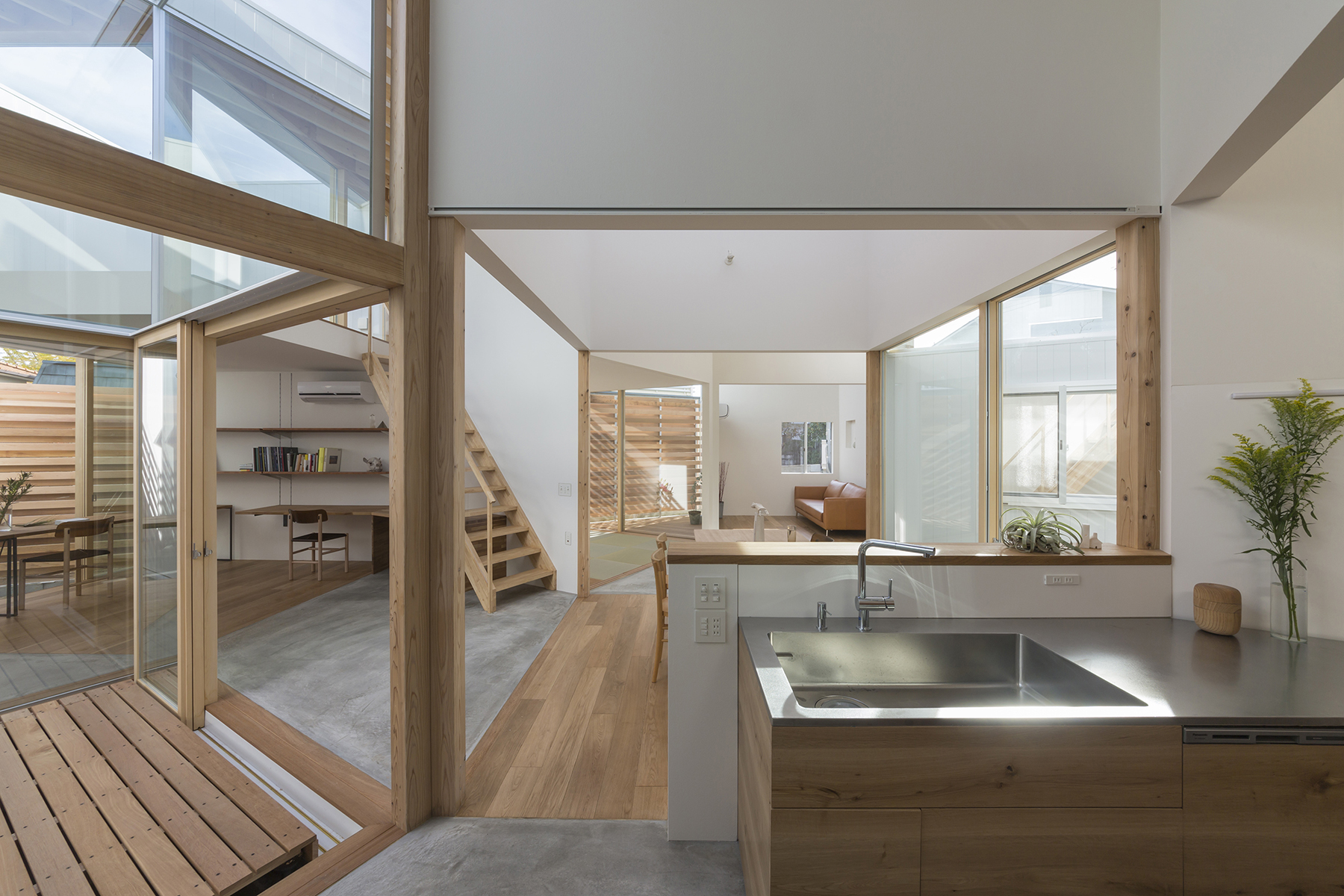 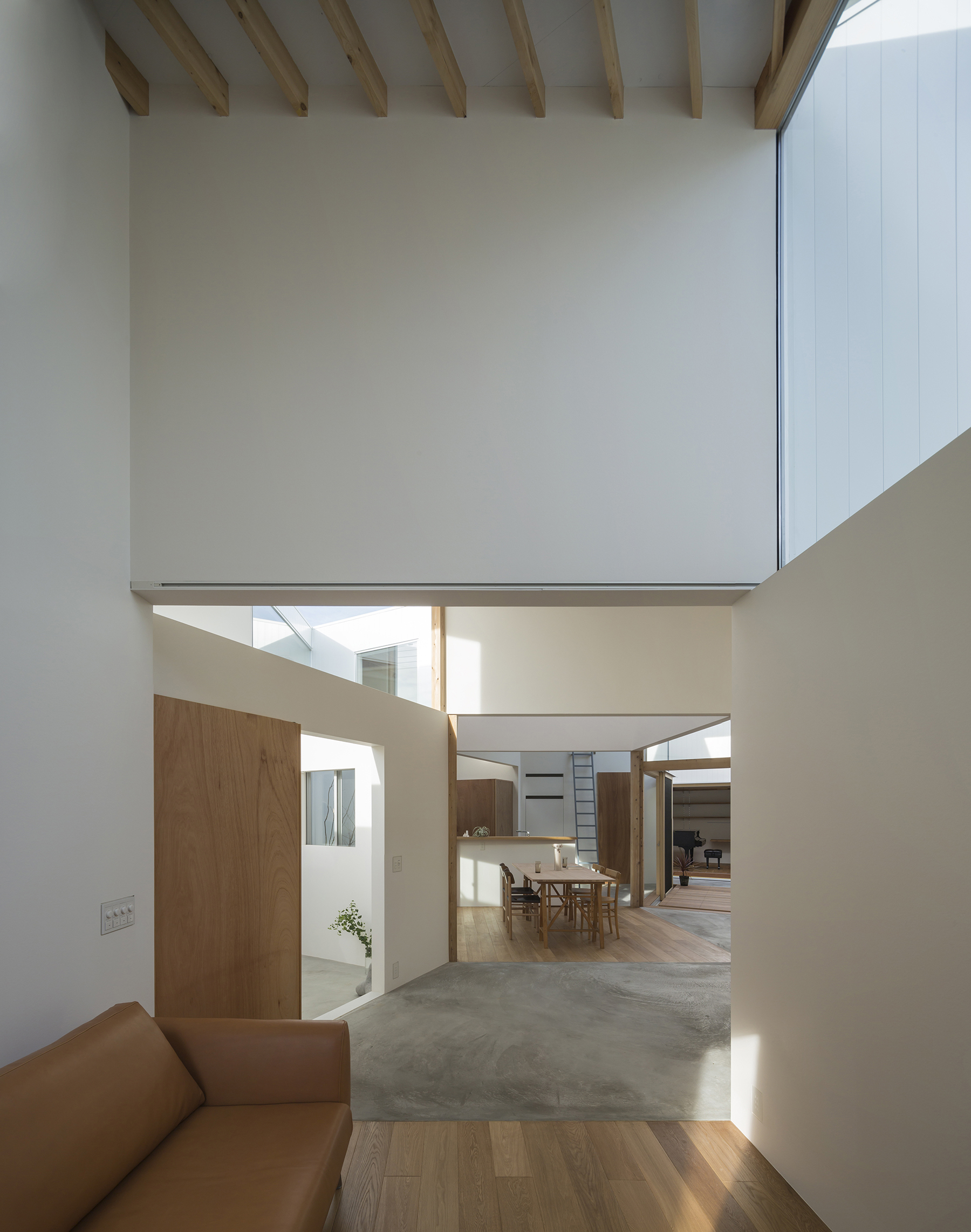 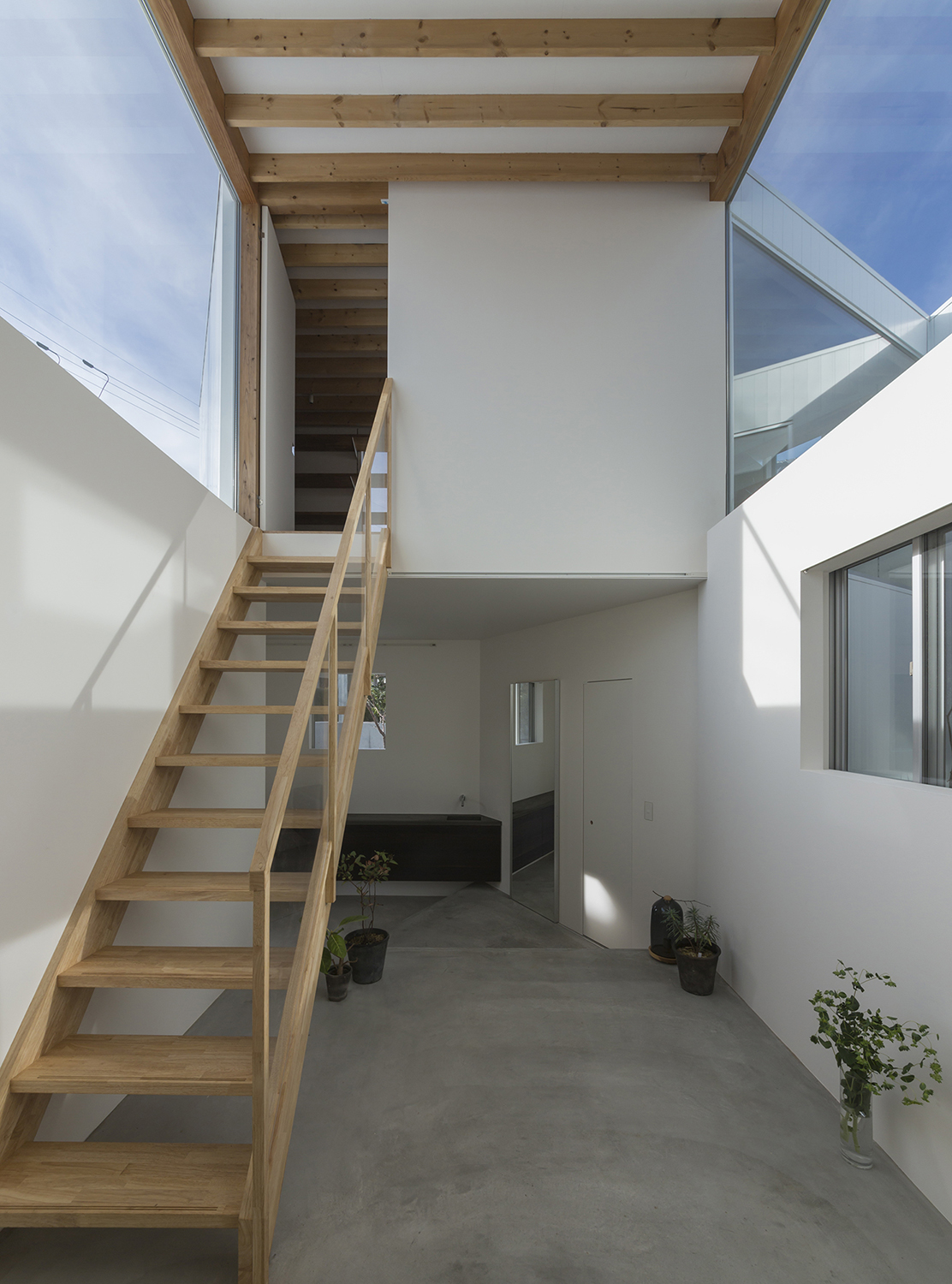 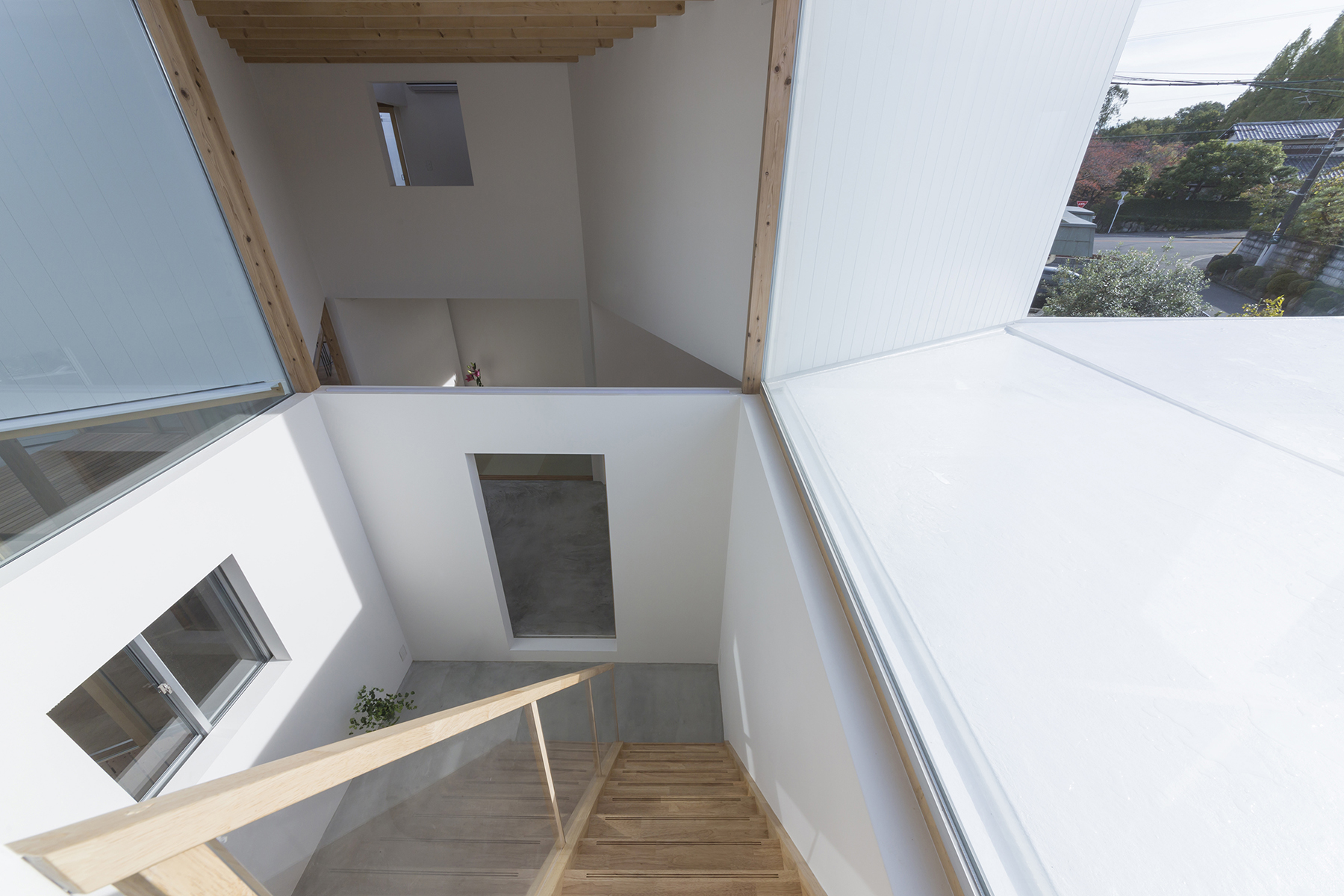 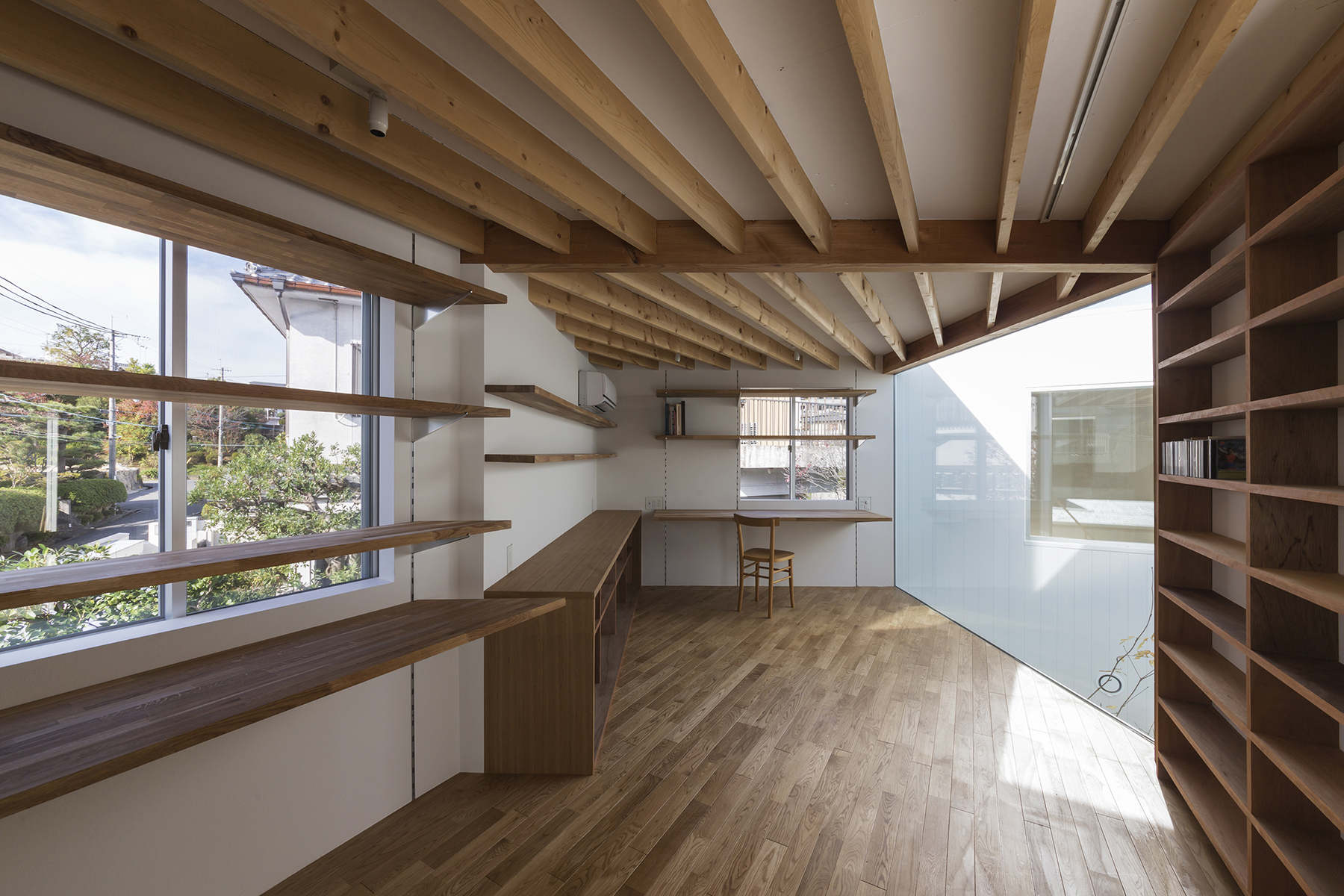 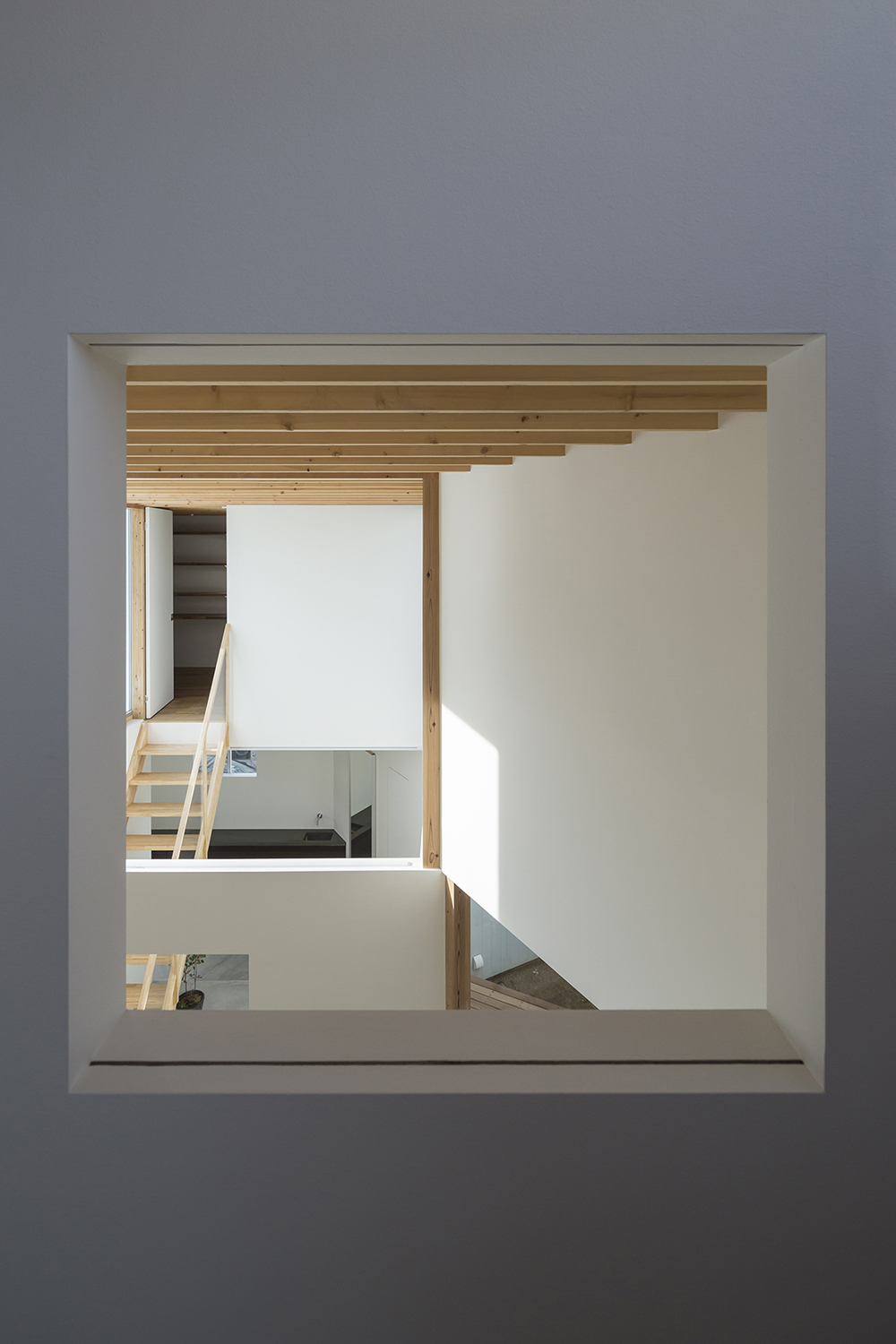 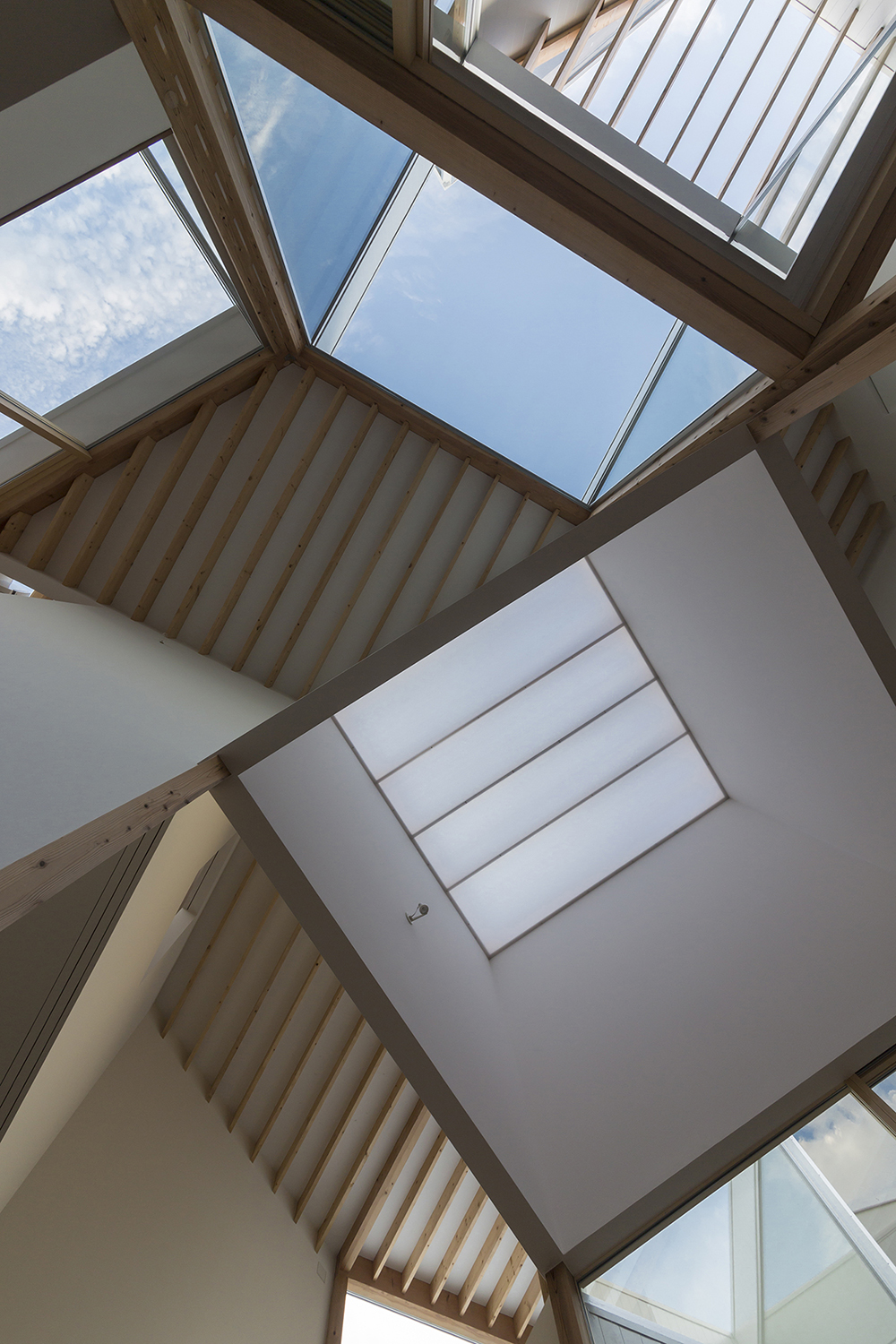 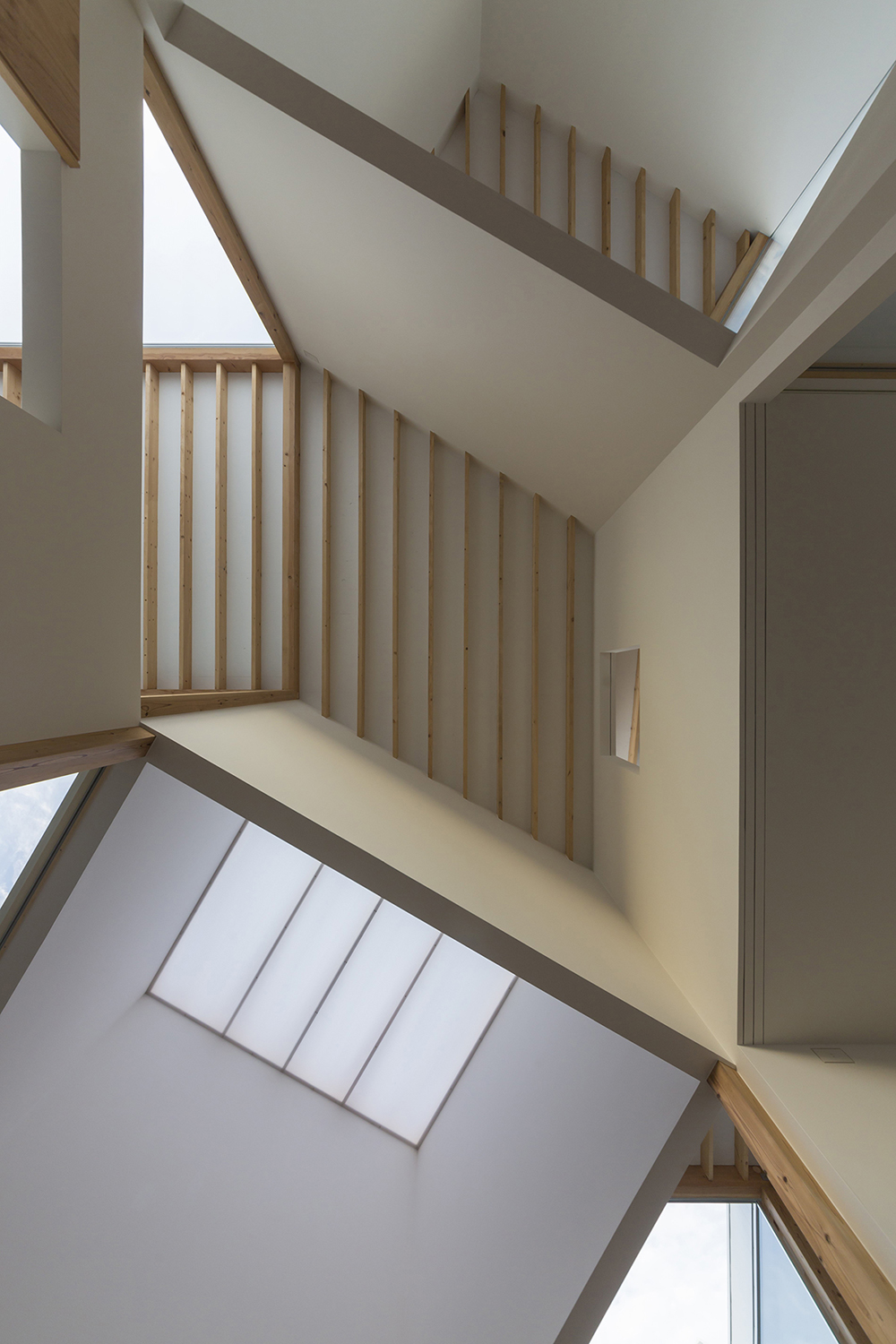 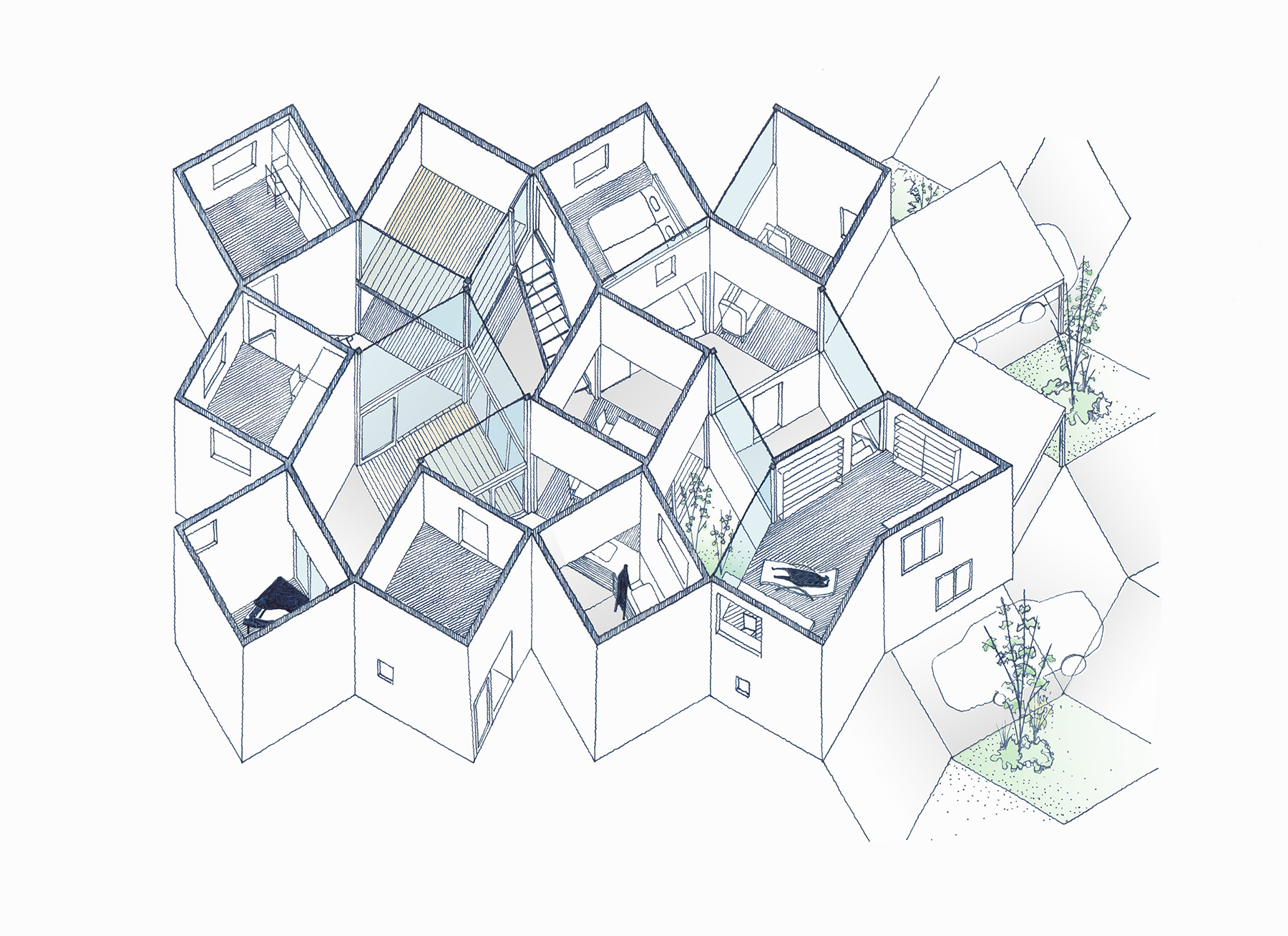 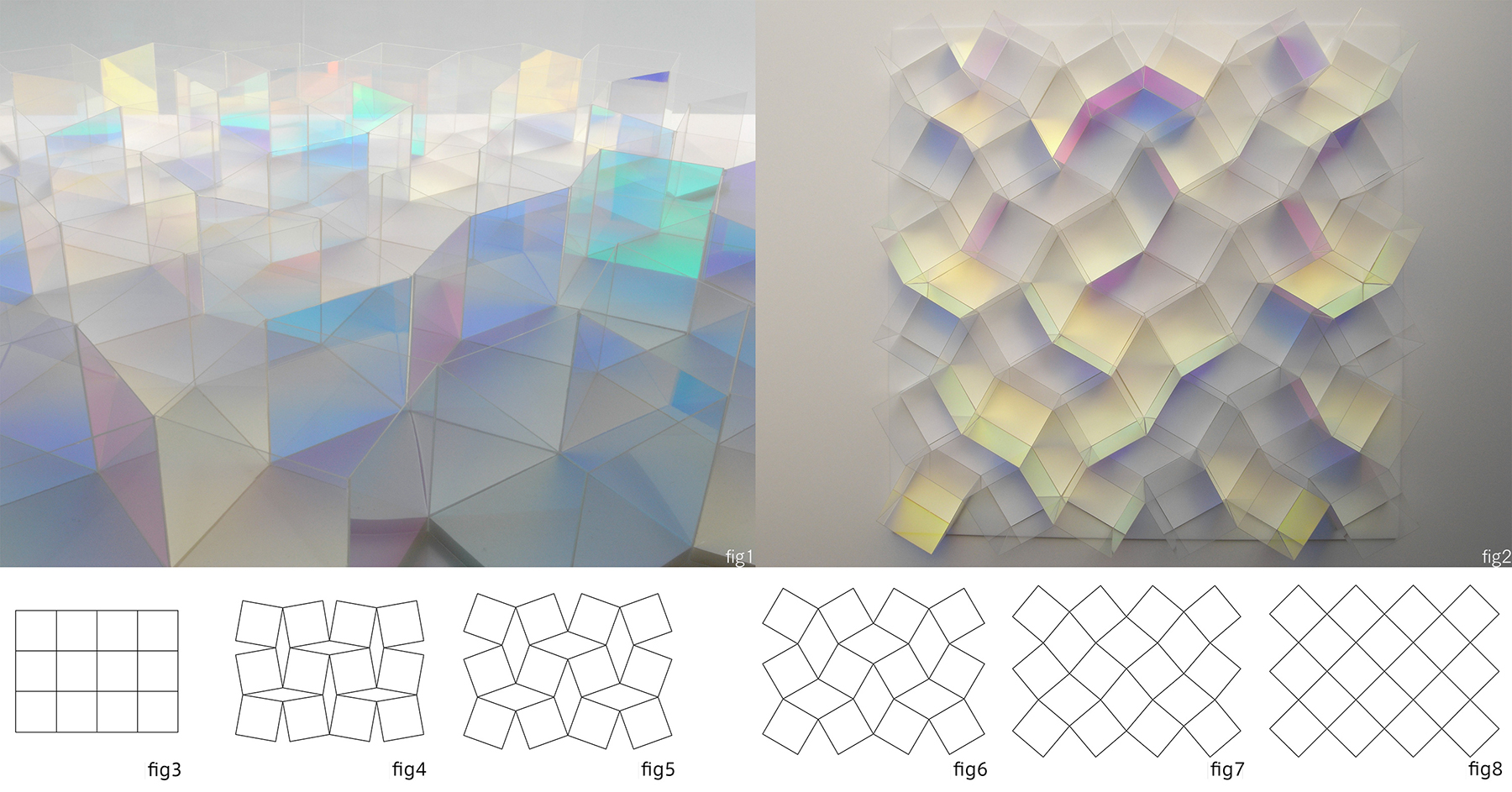 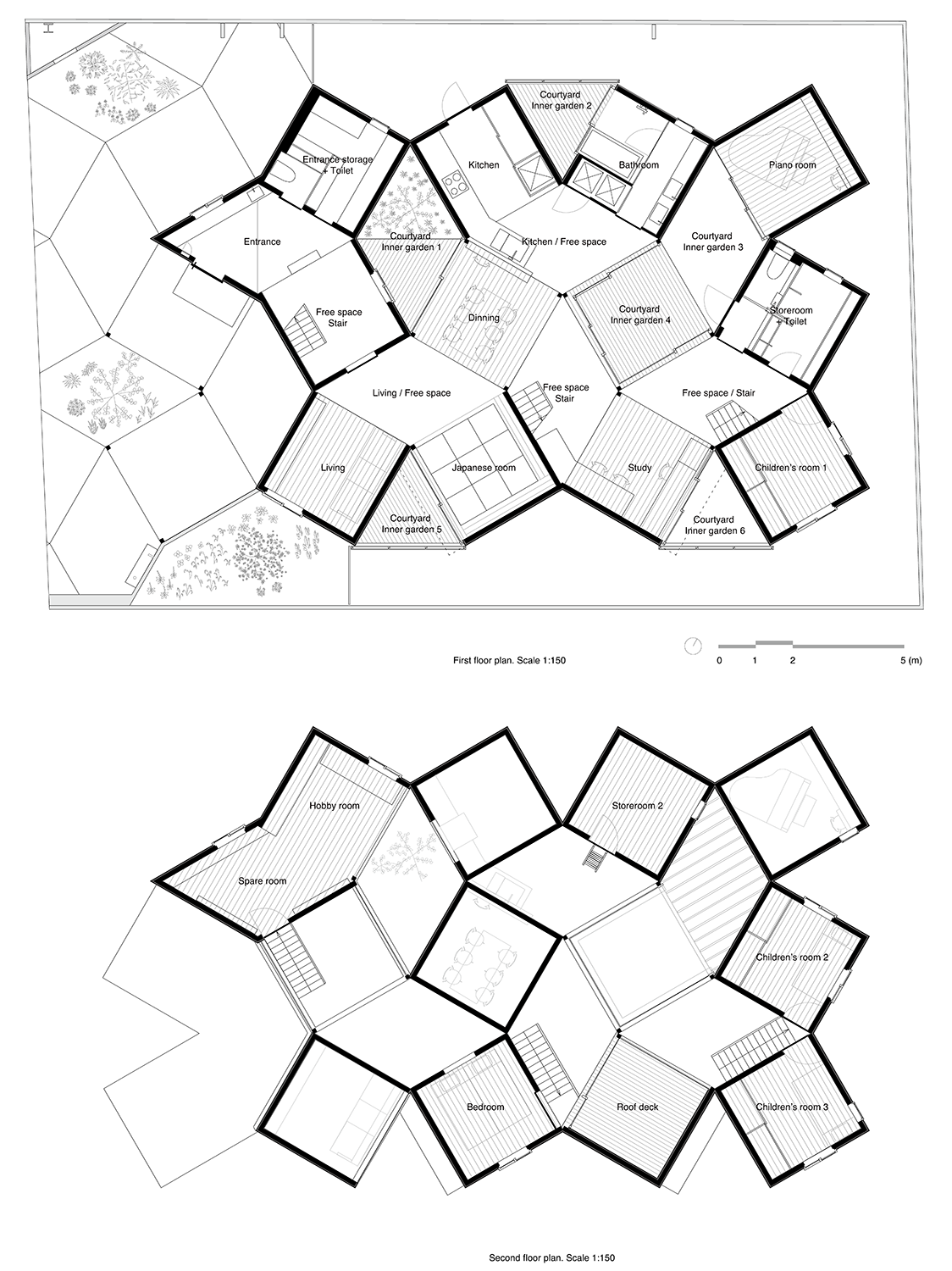 Well-planned houses are sometimes too close to human lives. While they are comfortable, I feel that too much planning has the risk of forcing a pre-defined lifestyle onto the residents. Perhaps if we start the process from a point not too close to the client’s initial wishes, and seek an autonomous solution while considering various conditions, we will ultimately enable them to live more freely and actively.
Simply-angled, geometric spaces are one of the possible forms for the residents to pursue freedom and make full use of an autonomous space. Since we are familiar with spaces designed with right angles, it is easy to measure their spatial volumes and relationships. However, by slightly turning the corners where the walls intersect, our spatial awareness suddenly becomes complicated, and we feel as if the limited space has expanded.

House in Hokusetsu is a house for a family who wishes to enjoy a life filled with everyday discoveries, and appreciate each other’s presence. Because they wanted to have many rooms, twelve 2.895-millimeter squares were arranged to connect to each other with a rhombus composed of two regular triangles. I had been sensing potential in this pattern from earlier studies, where we had experimented by making models(fig1.2）. As the twelve squares are gradually turned to become a sequence of eighteen squares(fig3-8), a position that fit nicely into the site was selected, creating a dynamic pattern out of all the different angles. The main functions were primarily placed within the square parts of the plan, and the rhombus areas were left undefined for free use.
The structure remains relatively closed to its surroundings, which was the client’s wish. There are three garden spaces along the outer perimeter, and two courtyards on the interior. As a result of the plan pattern design, both indoor spaces and courtyards are brightened by top light, and illuminated with various forms of light.
Since exposure to outdoor scenery, to which one can position himself, is limited, the space encourages the residents to travel between the different rooms to rediscover their own location.
The structure is made of wood, and each square plan is simply supported by pillars, resulting in a peaceful interior despite its unique form.
The design of this house has a simplicity similar to ‘a cross inside a square’ plan used in old houses. Each part, while representing a different quality, is also compatible and expandable, and there is possibility for various circulations to emerge. This house is filled with autonomous spaces that can accommodate changes in lifestyle; it is a crystalline labyrinth where the spaces are repeatedly reflected into a prismatic figure.