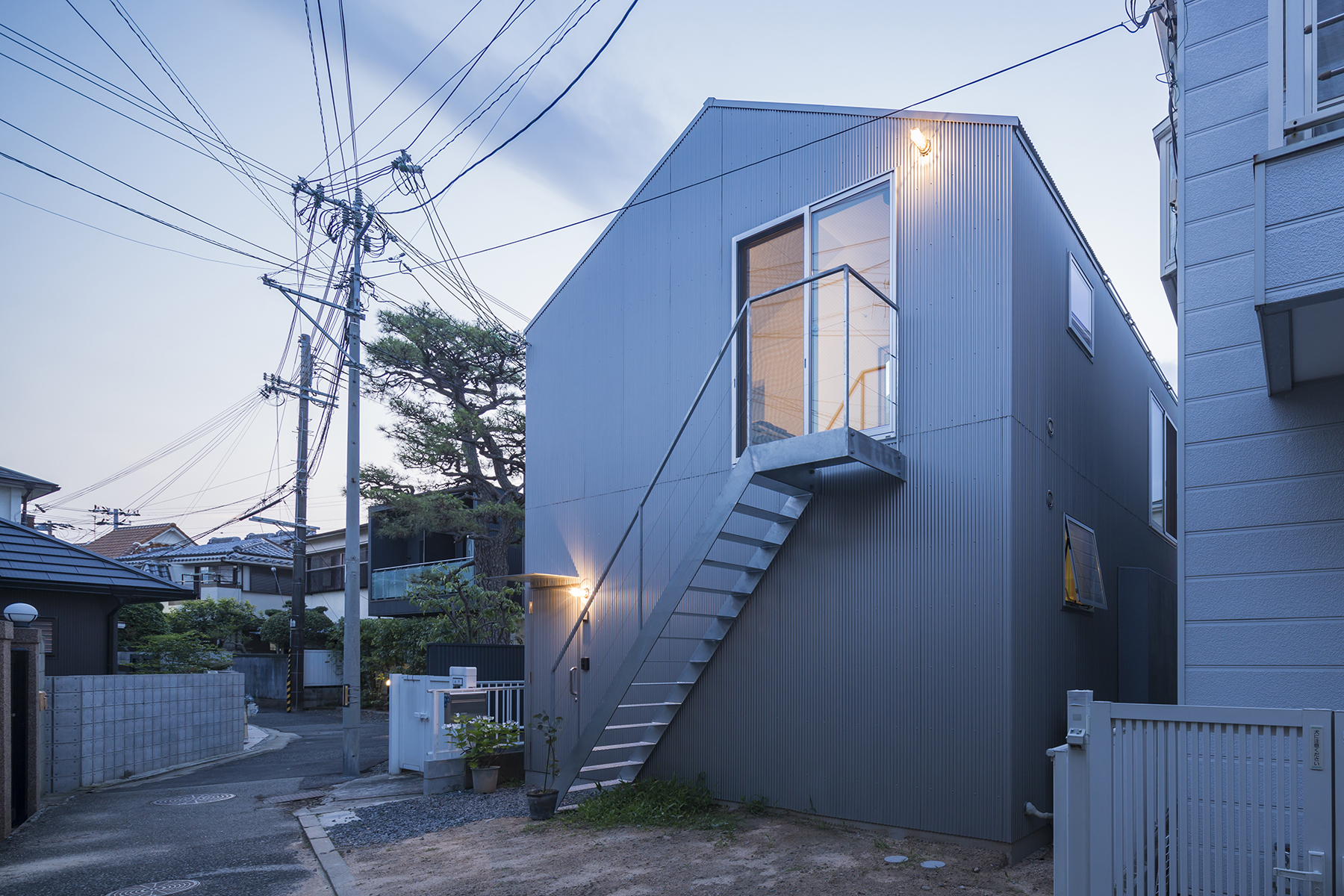 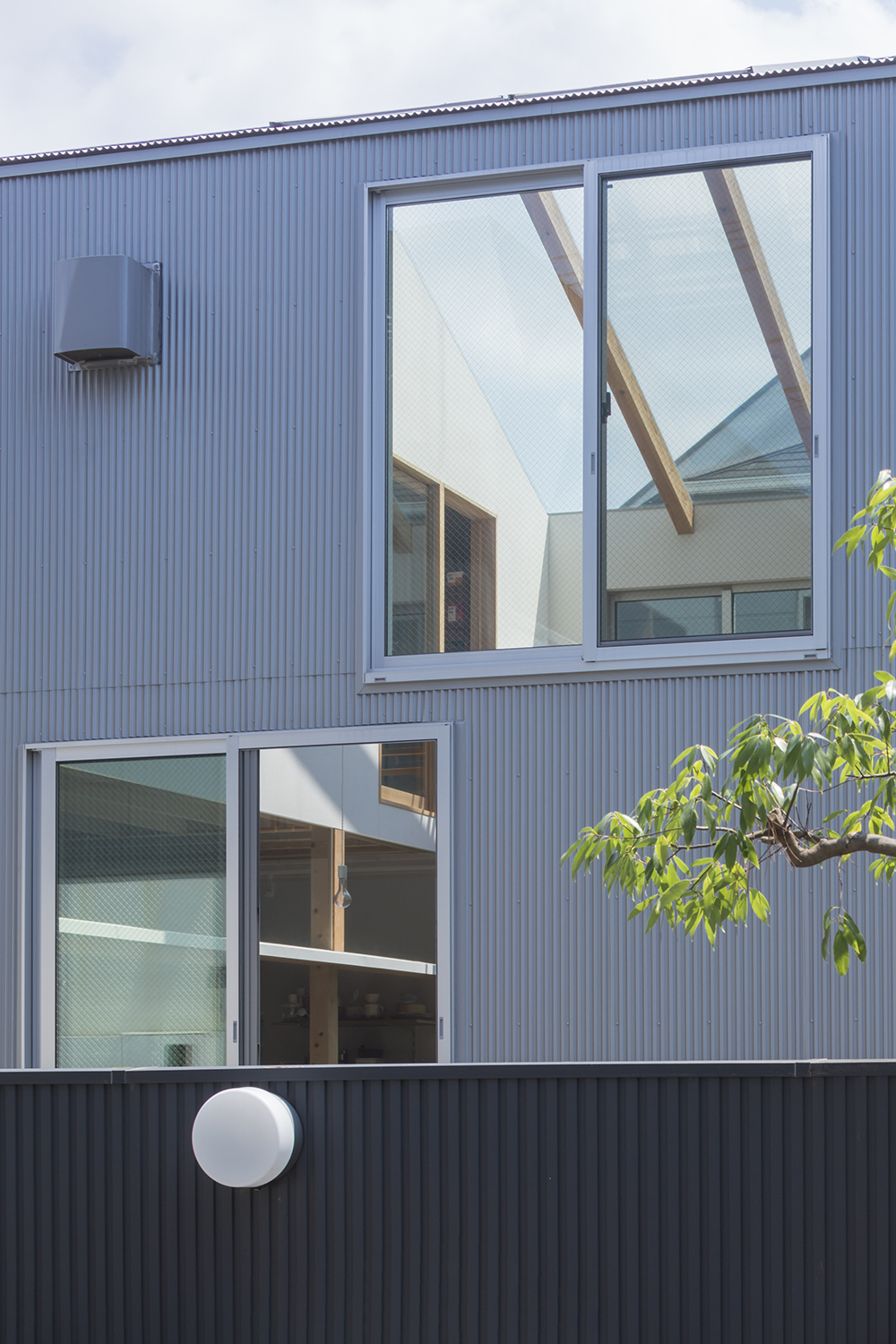 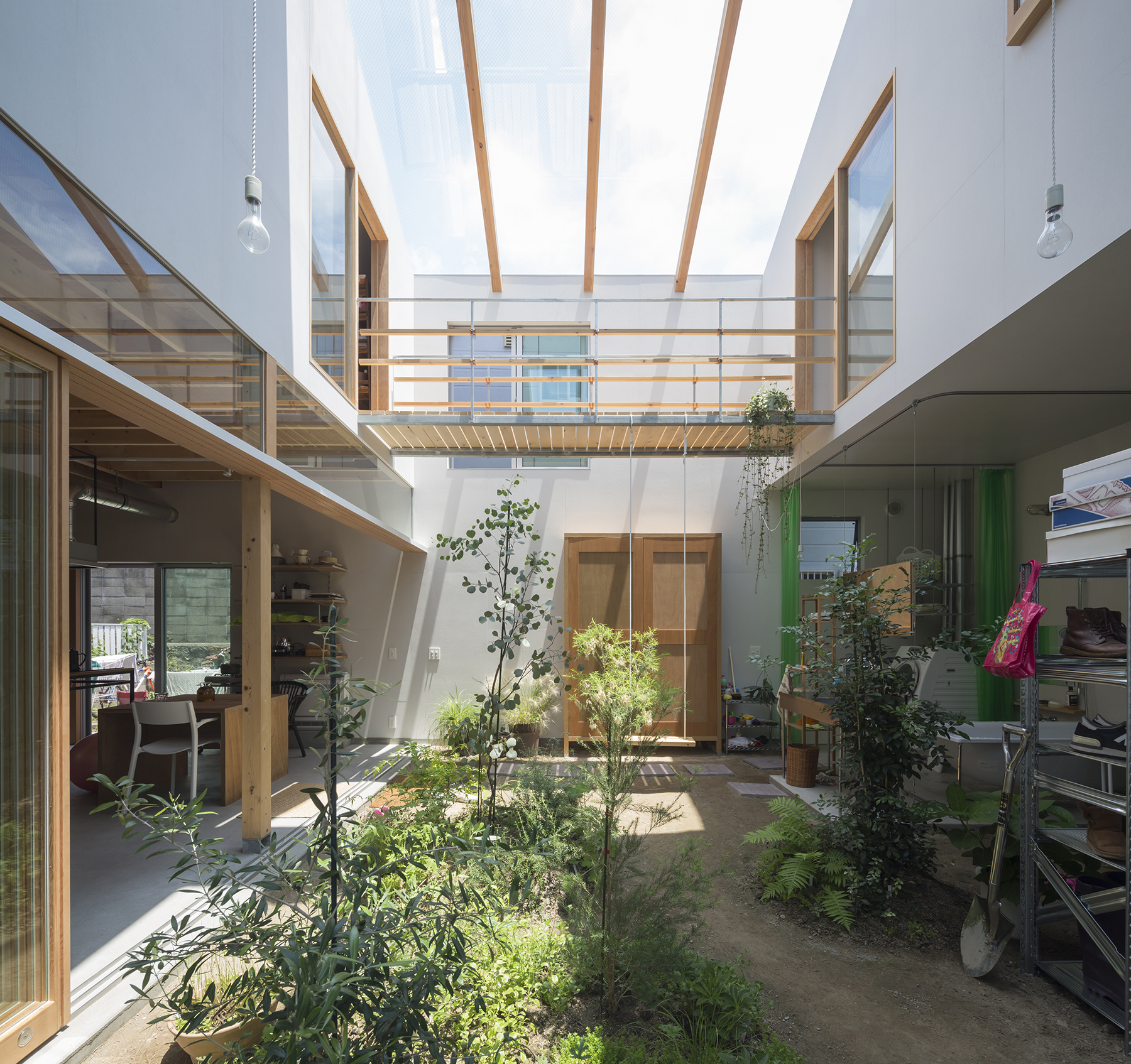 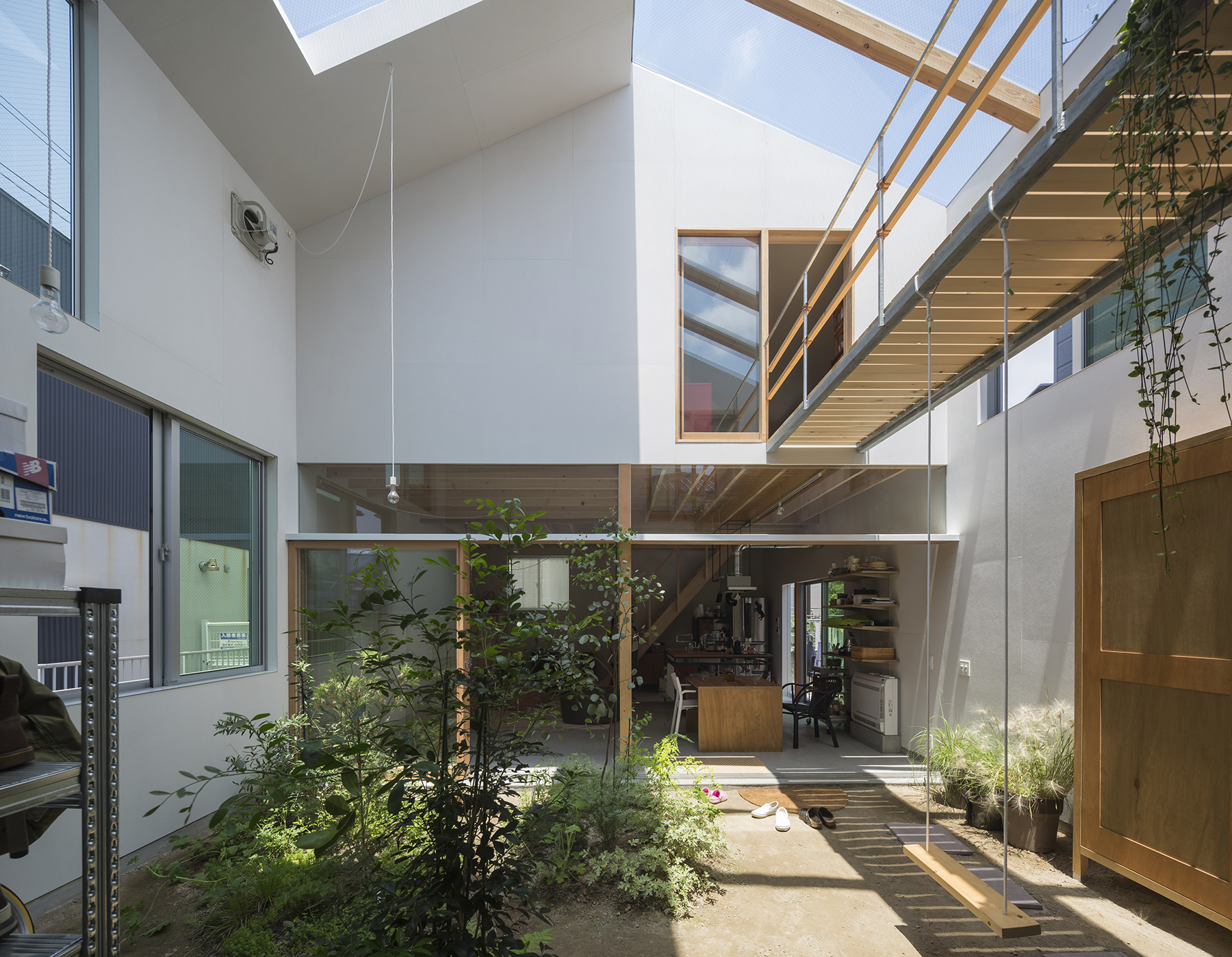 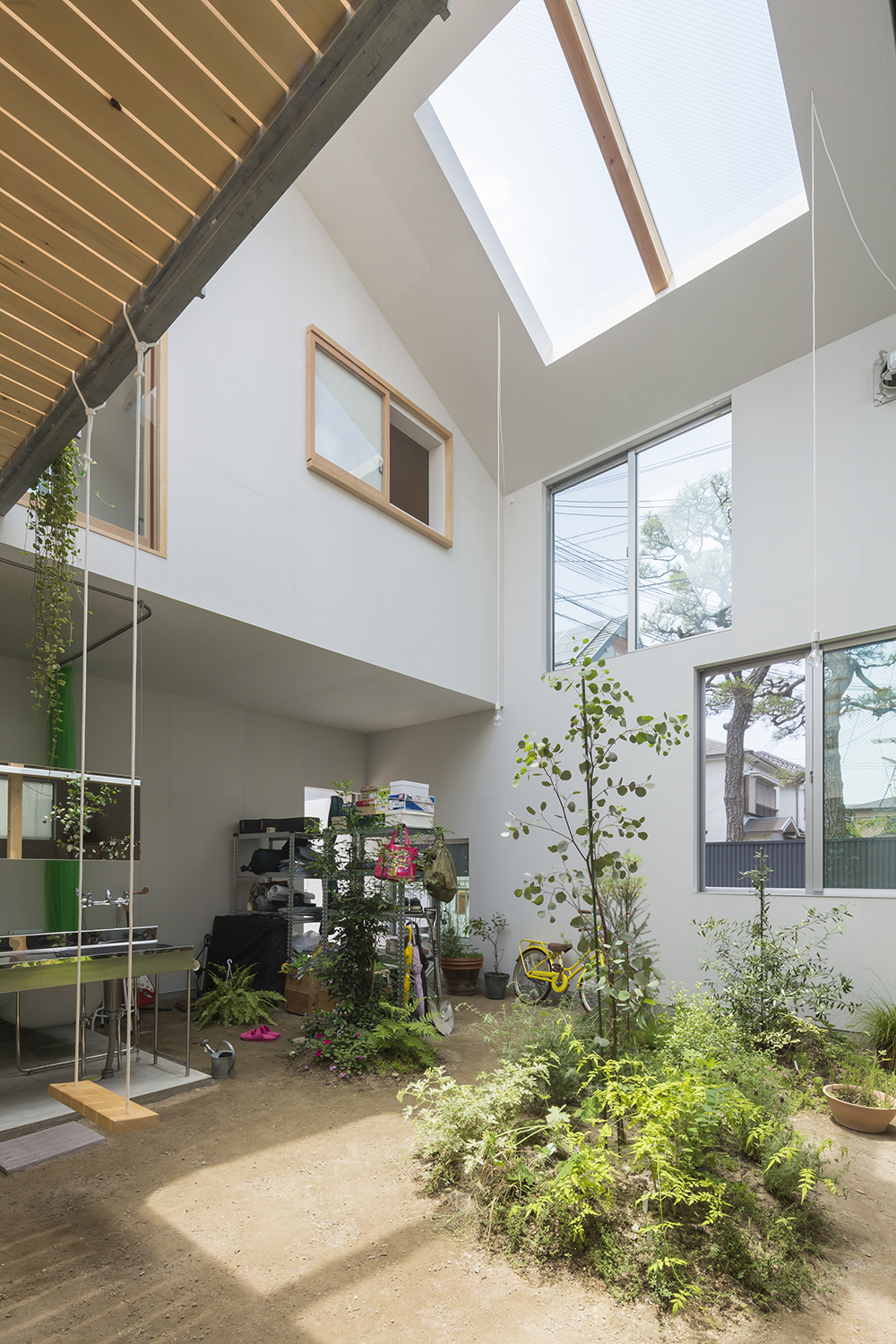 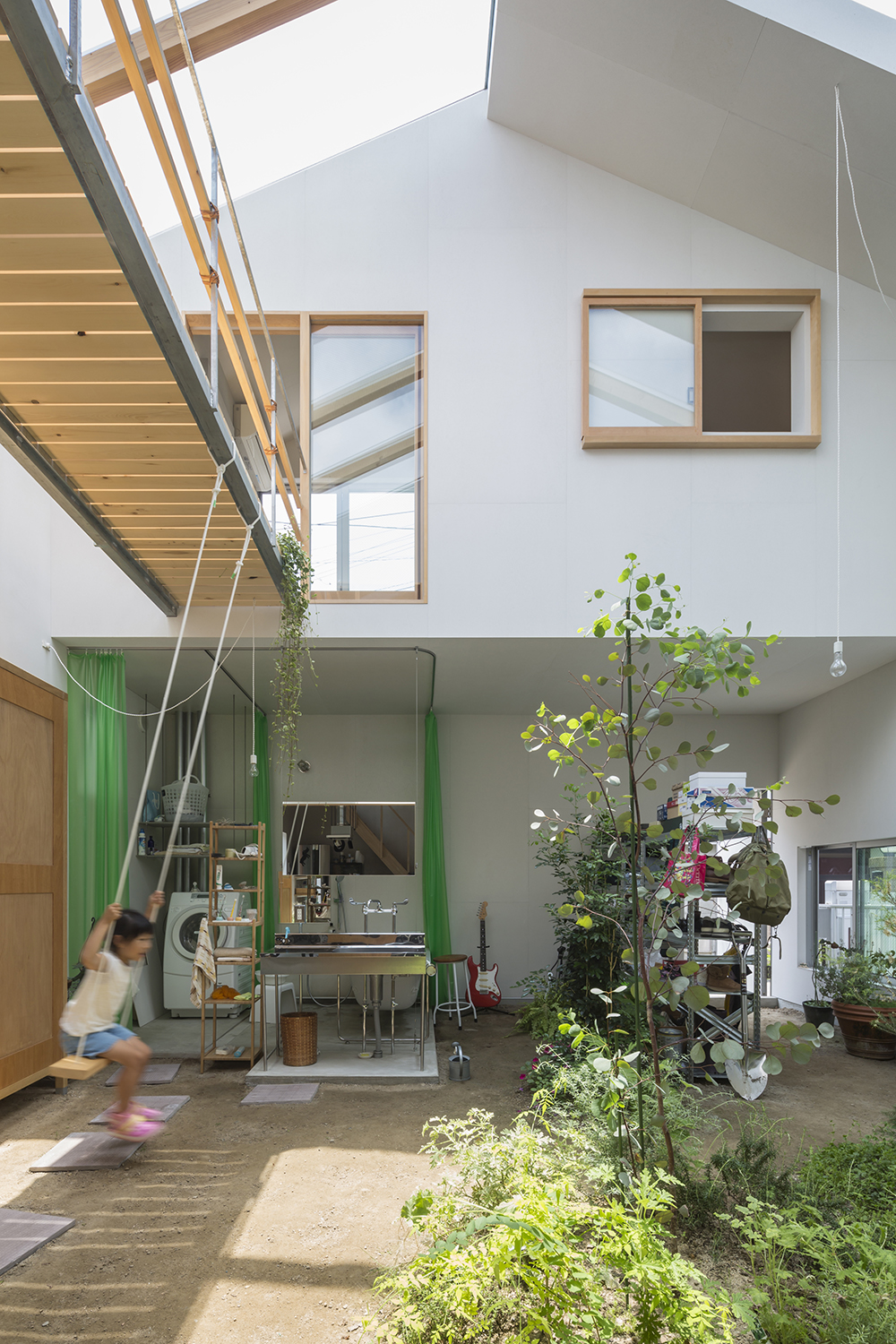 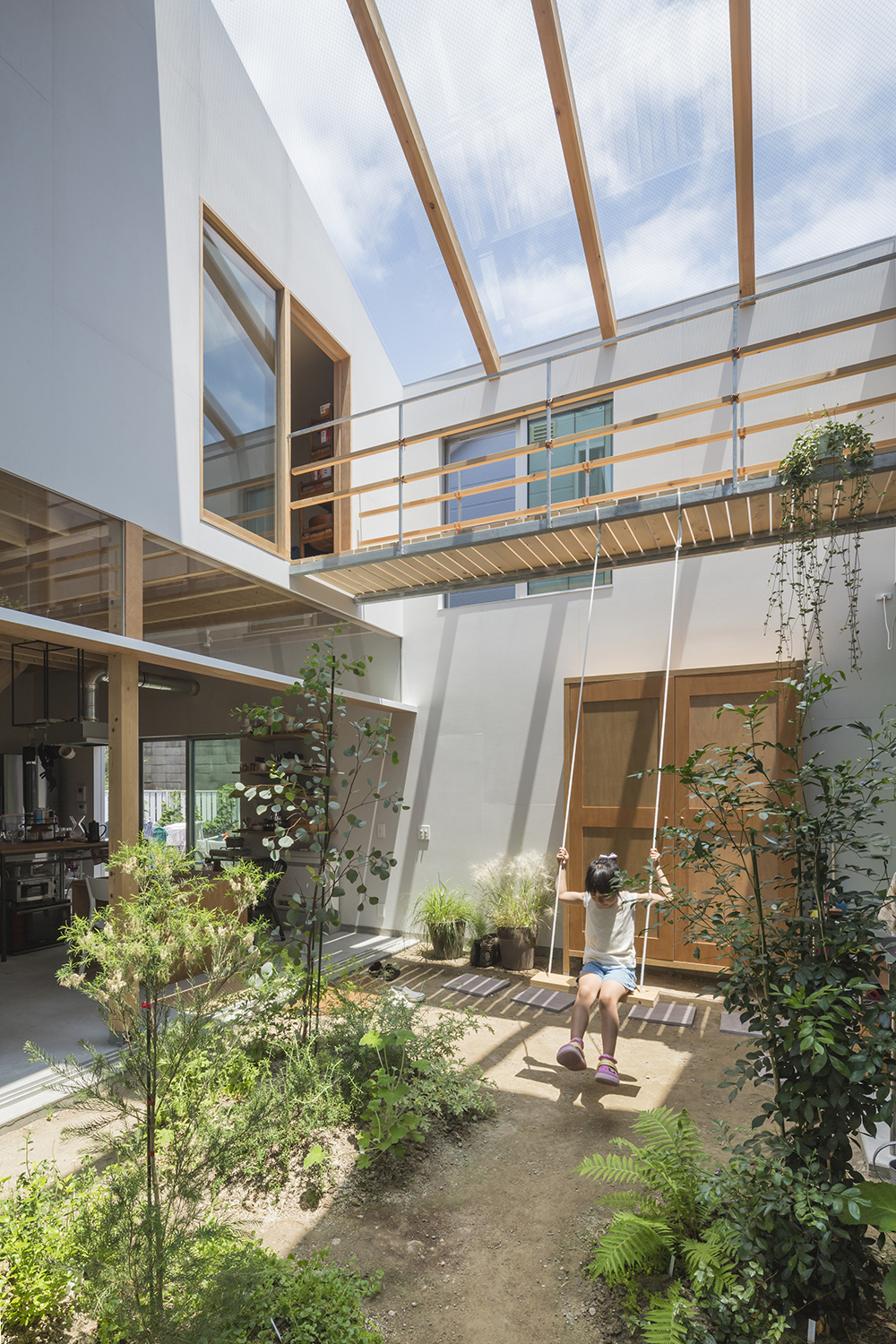 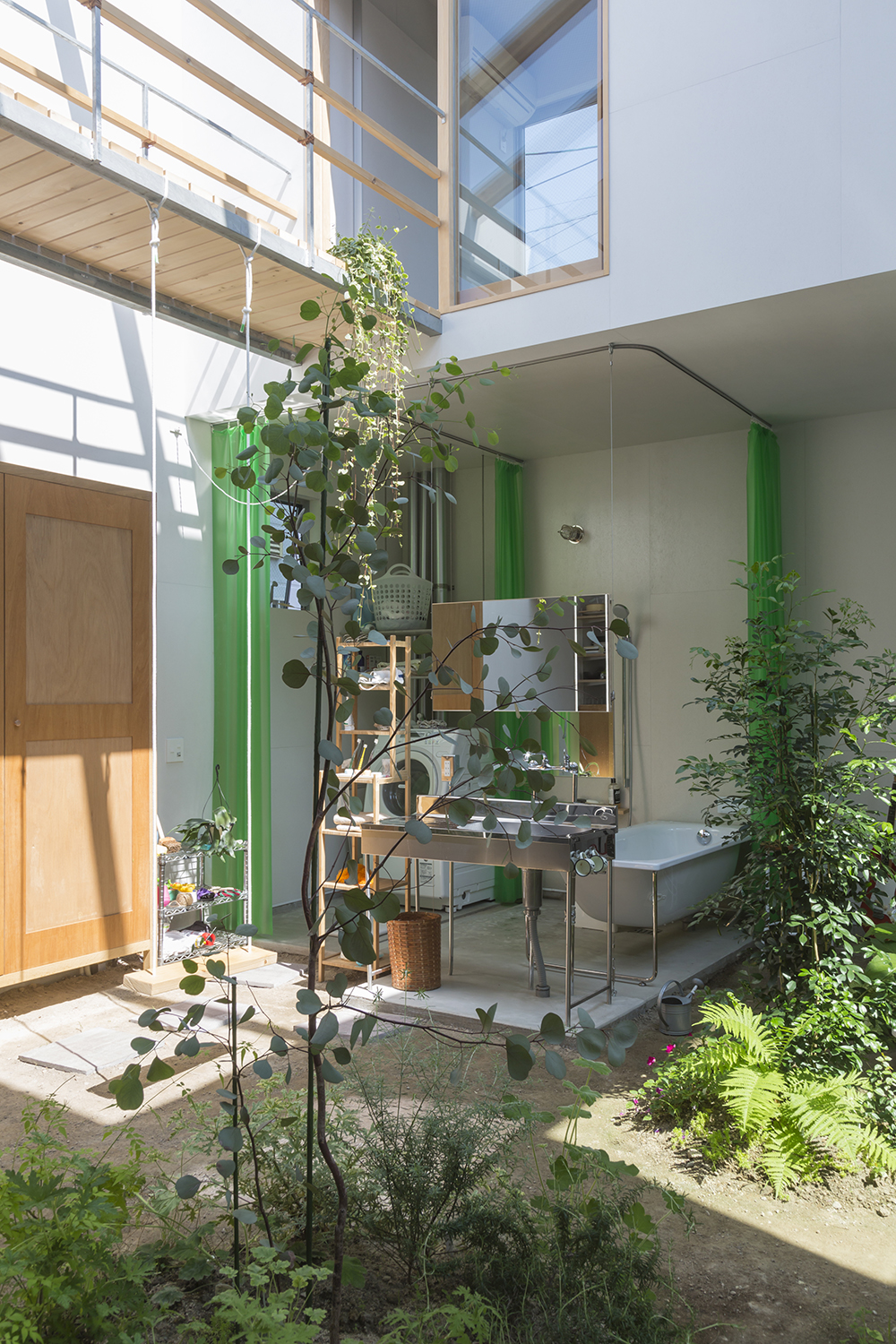 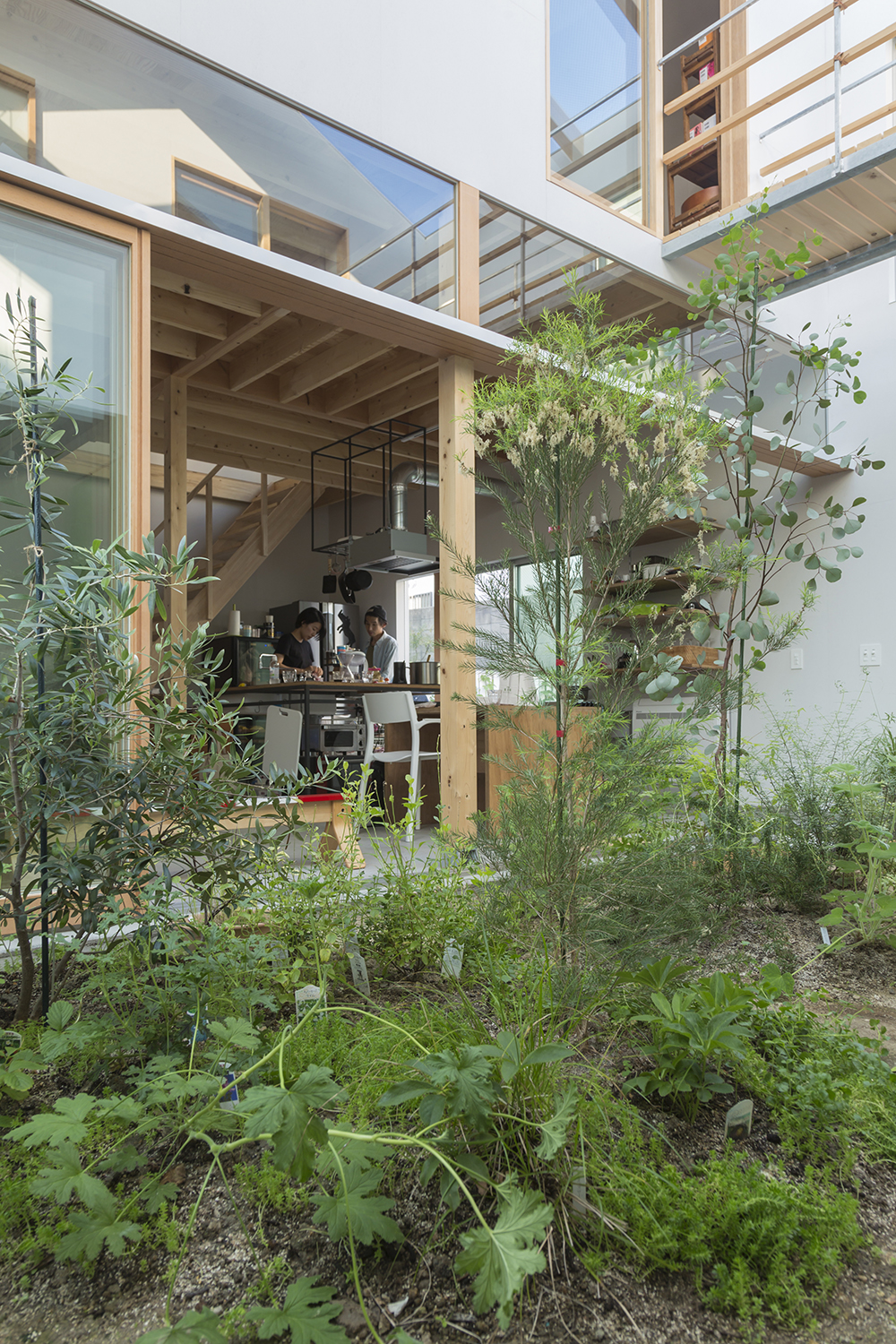 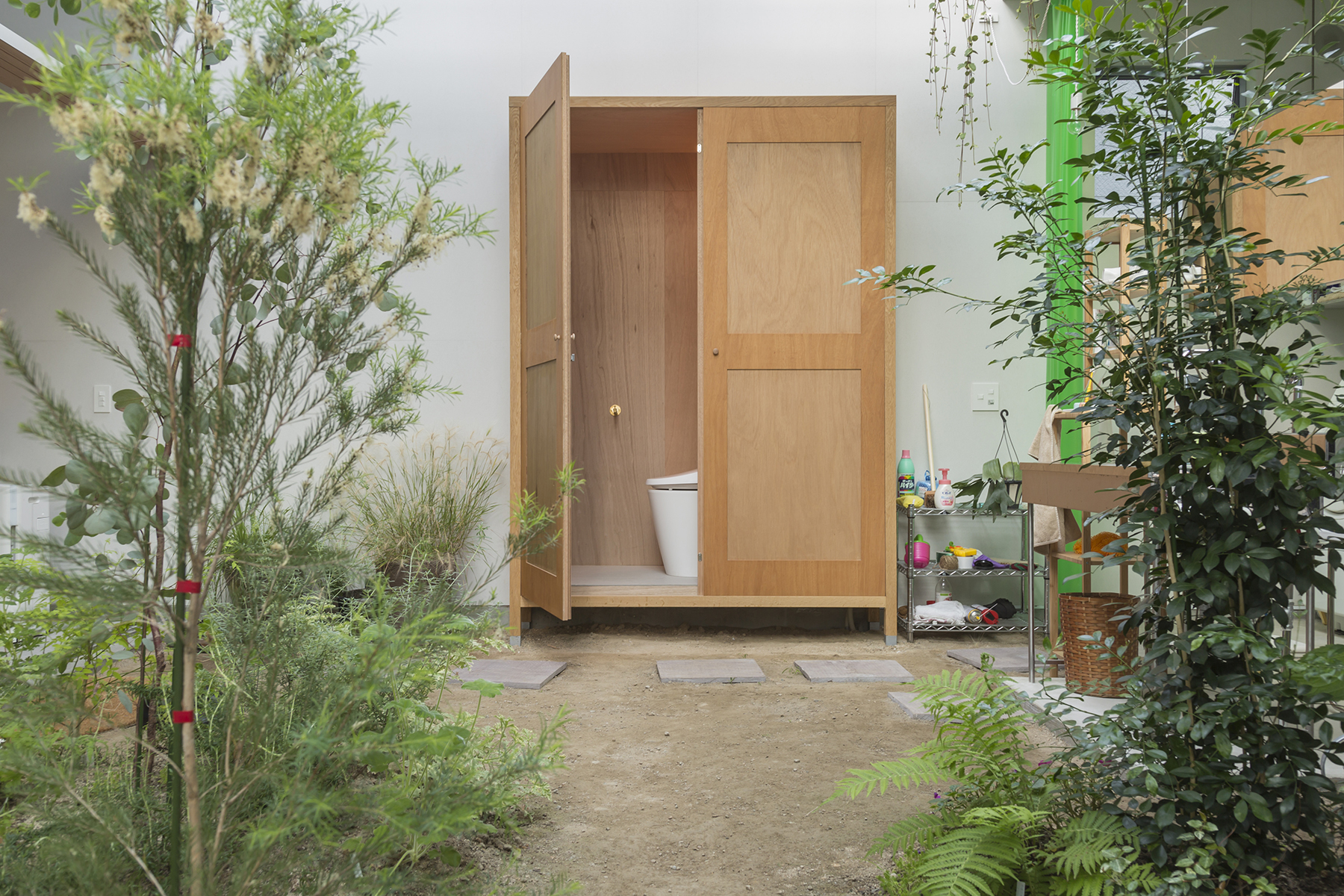 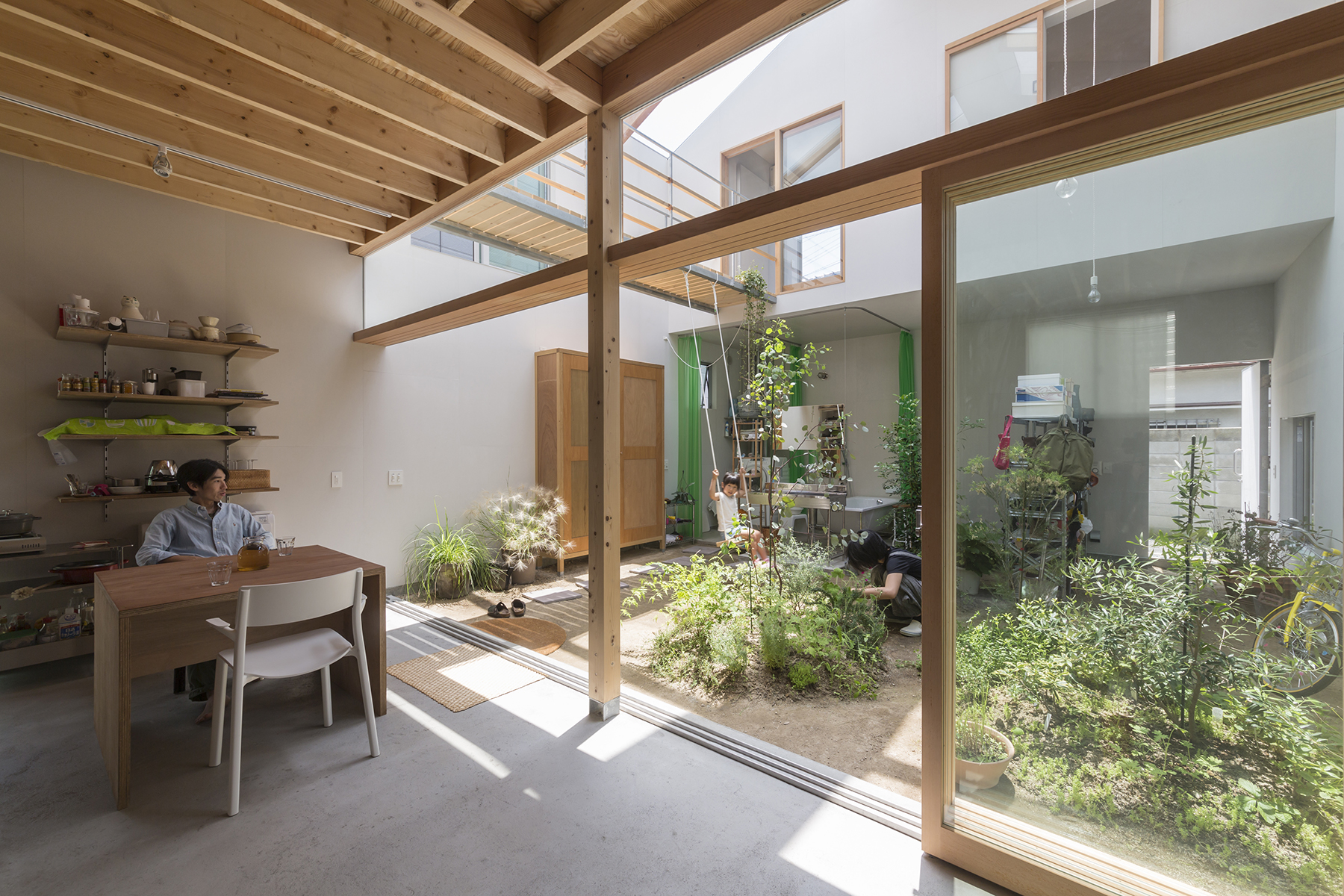 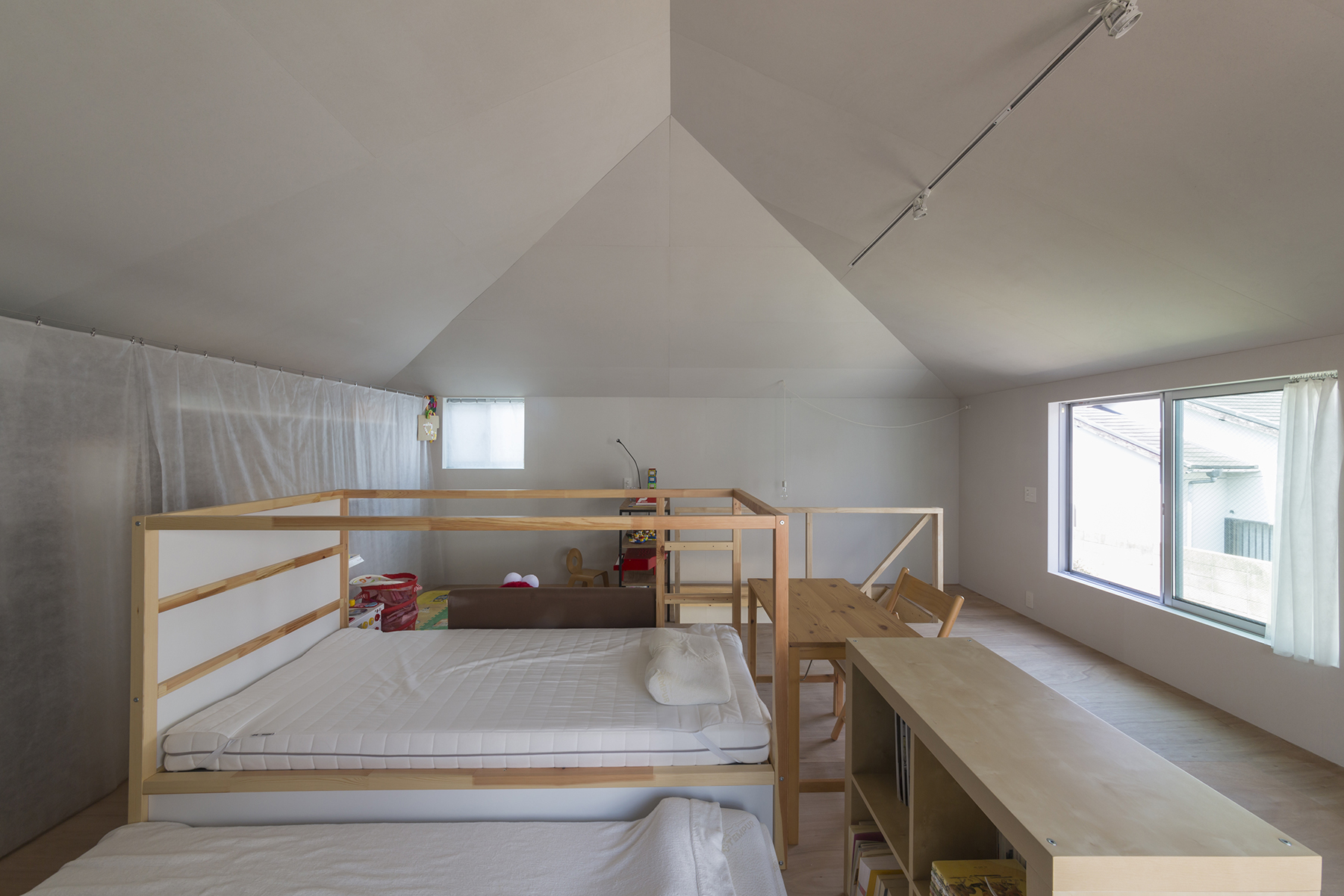 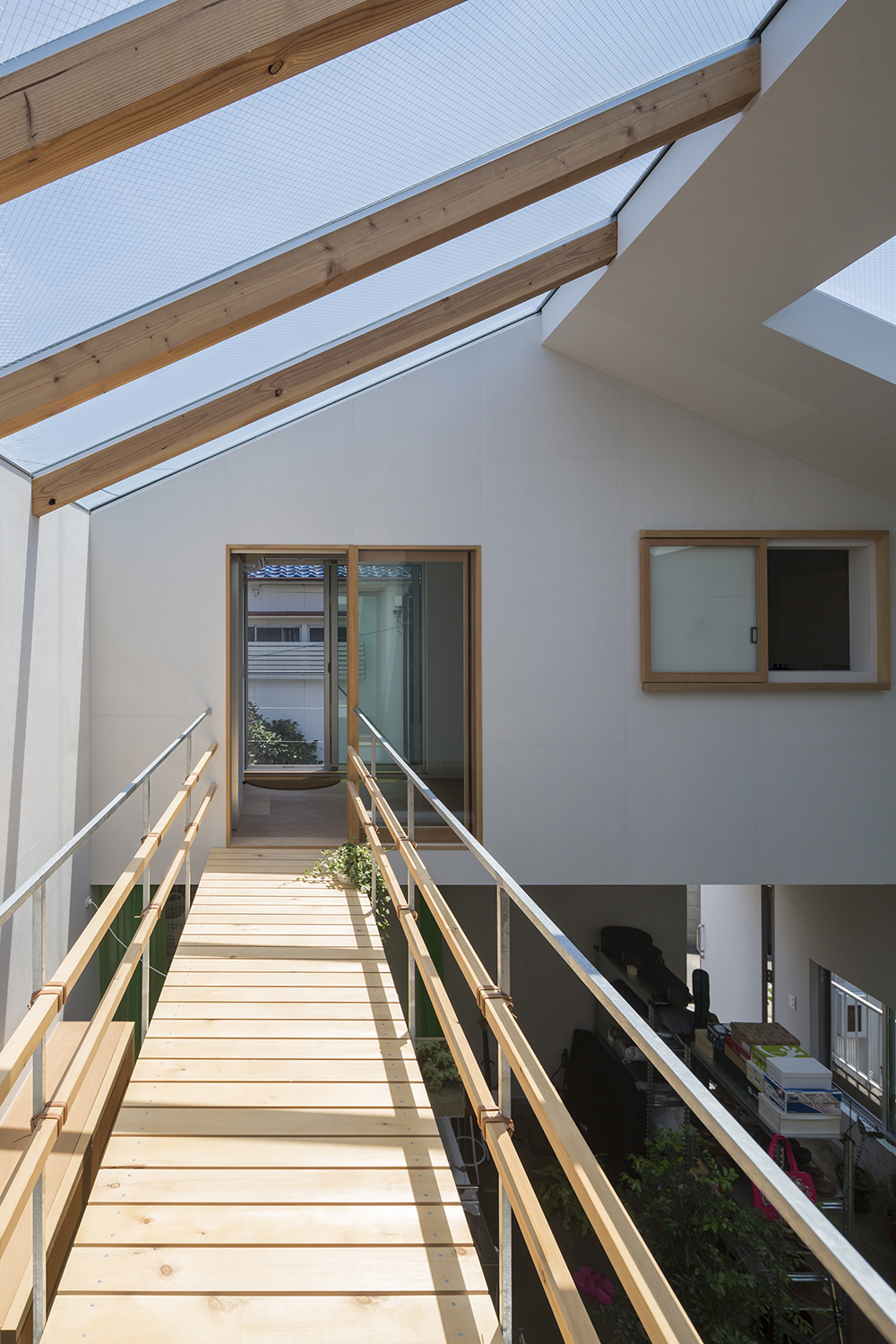 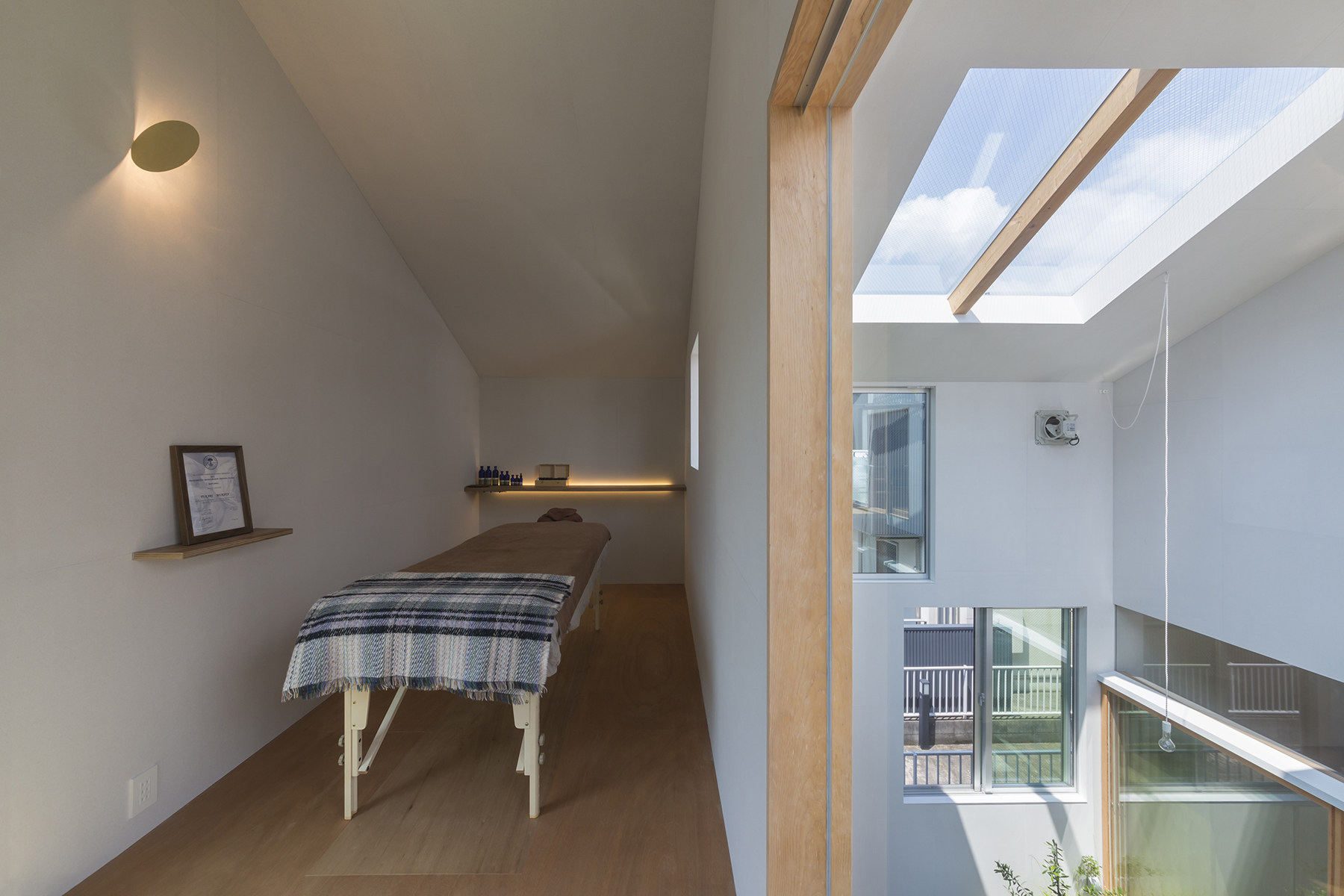 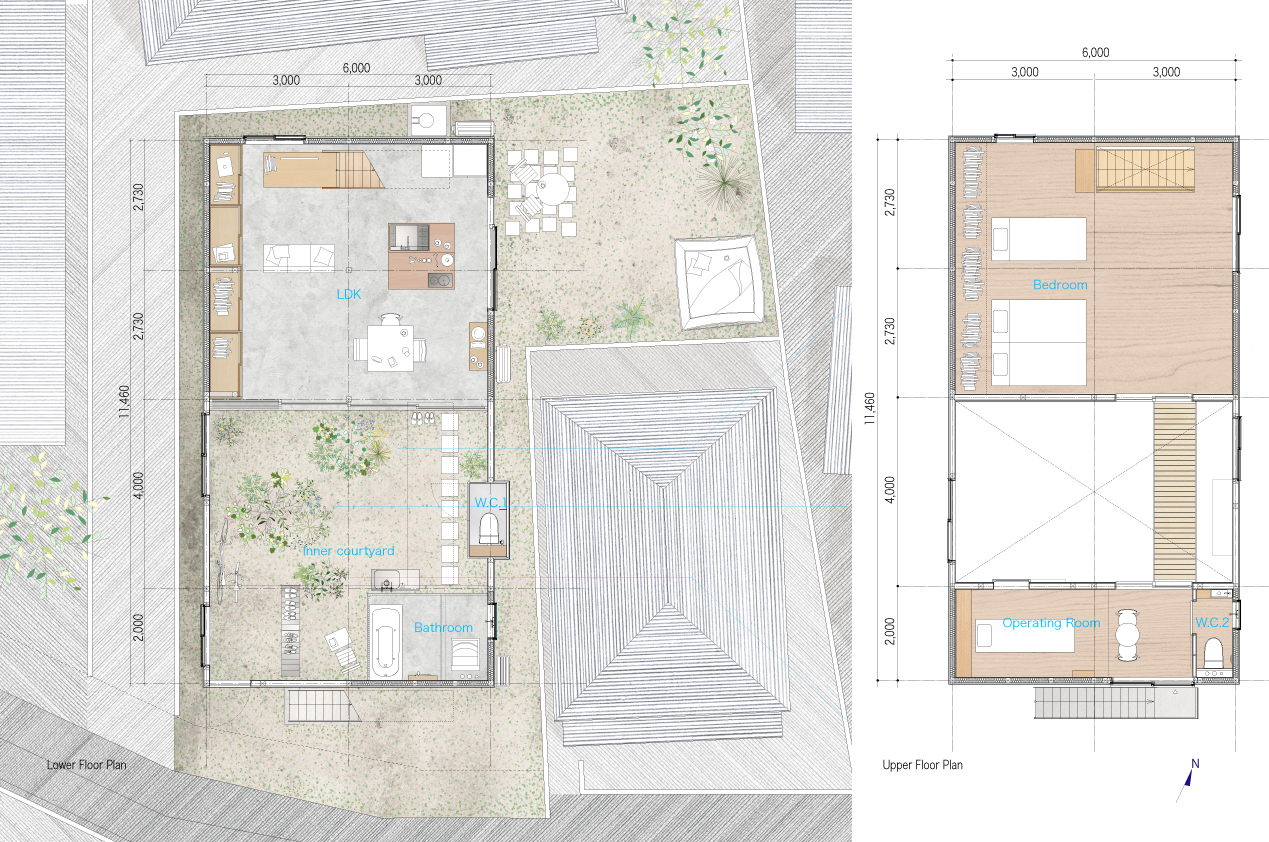 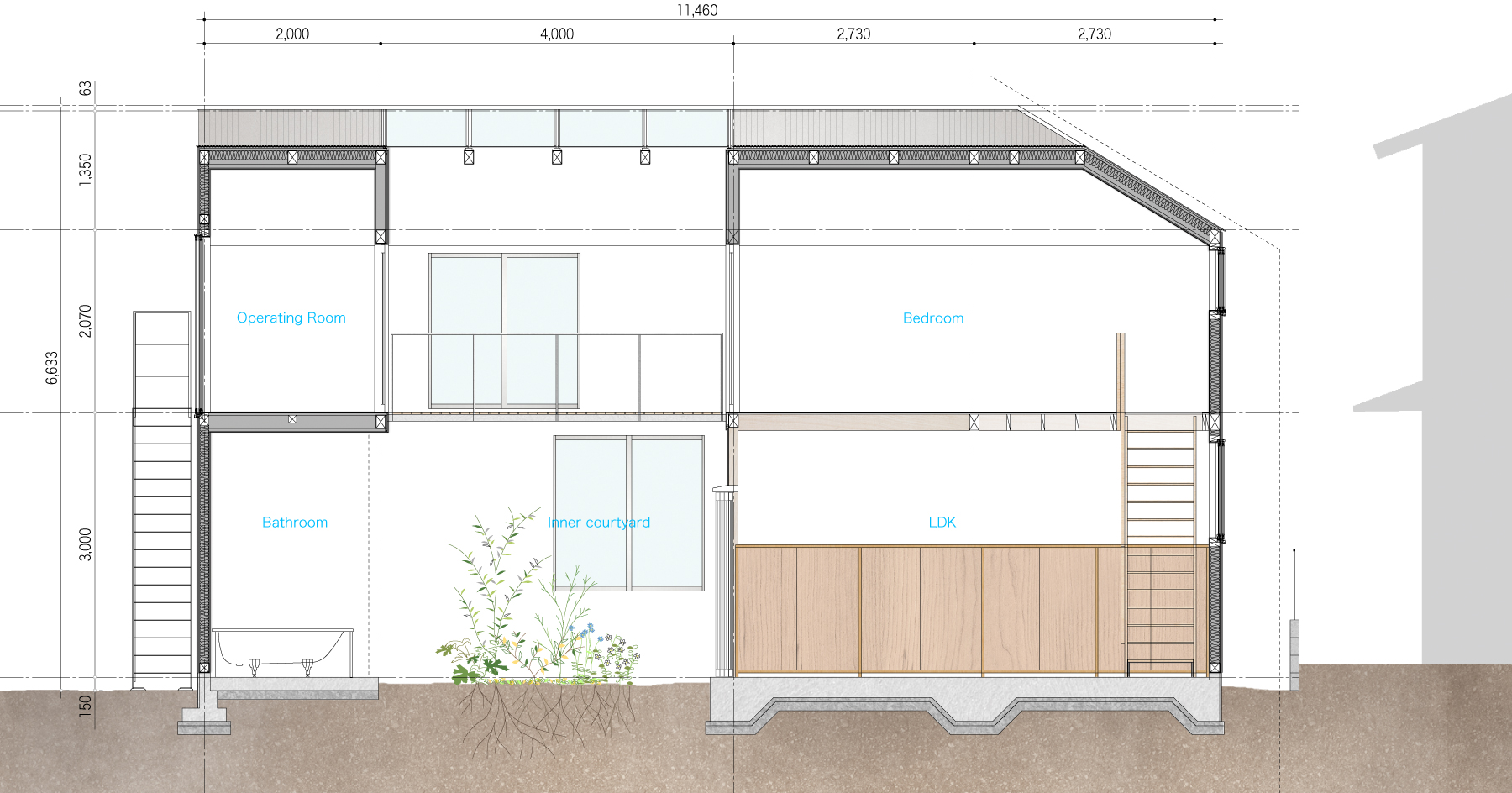 House in Tsukimiyama
A House with a Courtyard
Many people, including Kazuo Shinohara and architects of my generation, have made houses that contain gardens, but to me the most impressive example was an acquaintance’s studio-cum-residence that I visited when I was in university. The floor of the house had simply been tamped down without using any hardening chemicals or special techniques. As grass grew up around the table legs, you could sprinkle your leftover tea on the ground. The design made it difficult to decide where the garden ended and the interior began. Since that experience, I have often thought about that I would like to create a relaxed space in which interior and exterior intermingle.

The client in this project, House in Tsukimiyama, was hoping for a lifestyle in which a main building, containing the living room and other rooms, would be linked to an annex-style bathroom by a tarp-covered courtyard. However, as it was necessary for the door to function as a fire exit, there were legal limitations regarding the size and type of glass that could be used. The question was whether the garden and the annex, connected via the door, would then seem unified. To deal with this situation, I took the bold move of incorporating the garden into the house and making a courtyard. Between the courtyard and the living room, we used a door with single-pane of glass and light wooden fittings, and in the bathroom annex, we used a curtain to partition it off as a section of the courtyard.
The aluminum-sash door in the courtyard can be opened at any time to let fresh air in from the outside. Creating a constant link to the outside air made it possible to avoid a stuffy hothouse-type atmosphere despite the huge top light. A pressure ventilator is installed above the courtyard, allowing it to be quickly ventilated.
By distributing the rectangular planes on the L-shaped site, we positioned the living space between the outer courtyard, which has the character of an inner courtyard surrounded by neighboring buildings, and the Inner garden. The idea of creating an inner garden that could be inside or outside depending on the furniture, is an extension of the verandah I made for House in Itami, which has a similar character.
The Tsukimiyama project made it clear how much potential there is for urban gardens. The external environment in an urban area often lacks shade and proper ventilation, and because it is also prone to be a habitat for mosquitoes and other pests, it is difficult to spend a comfortable time in the garden. But by using a screen to filter out the insects, the courtyard becomes a comfortable place. Moreover, the fact that a courtyard is to a certain extent open to the environment without impairing privacy, makes it an important interface between the inside and outside in an urban house, which tends to be rather closed. The courtyard also functions as an important intermediate space, both in terms of the indoor climate and communication.